Frank Cavallo is a horror and dark fantasy writer. His previous works include Eye of the Storm, The Lucifer Messiah, The Hand of Osiris, and the Gotrek & Felix novella Into the Valley of Death.

He was born and raised in New Jersey. He graduated from Boston University with a degree in Communications in 1994 and he earned a JD from the Cleveland Marshall College of Law in 2001. His life-long fascination with the darker side of human nature has led him to devote most of the past 15 years to a career as a criminal defense attorney, at the Cuyahoga County Public Defender Office, in Cleveland, Ohio. There he has come face-to-face with some of the truest horror in this world. Murder, rape, burglary, drugs. That's his bread and butter.

F.B.I. criminal profiler Diana Mancuso doesn’t do field work anymore. Not since a tragic mistake that cost innocent lives. But when notorious serial killer Luther Vayne escapes from prison and resumes his campaign of brutal murders, the Bureau convinces her to take one last case. To catch him, she must understand him. She must delve into the arcana that fuels his madness, risking her life and her sanity to follow his twisted path. The trail plunges her into a shadowy world of occult rituals and unspeakable horrors, leading to a secret cabal operating at the highest levels—and a plot to summon the darkest of all powers, to bring forth an evil that does not belong in our world—to enact the Rites of Azathoth.

Who are your influences?
Since my newest book contains a Lovecraft character in the title, you’d probably expect me to say HPL, and you’d be right. But there are plenty of others, especially from that golden age of pulp fiction.
I remember reading the preface to an old collection of Robert E. Howard stories in which the writer (I can’t remember who, unfortunately) said that a lot of writers made him want to read, but only a few writers made him want to write. That stuck with me, for two reasons. One, because I agreed with him, Robert E. Howard made me want to write too. Second, there are very few writers I’ve come across since who made me feel that way. Neil Gaiman and Clive Barker are the two guys working today who have that effect on me.

When did you begin writing?
When I was about eight years old, I started writing stories in school. At first they were just monster stories at Halloween, then sci-fi stories in the mold of Star Wars and Battlestar Galactica. That became kind of a habit, and I haven’t stopped since. 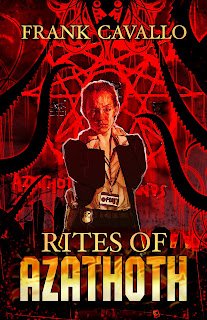 How do you come up with your stories, characters, character names, POV, etc?
I try to write stories that I would want to read, and I hope that other people share the same interests as me. As far as how I come up with them, that’s a harder question to answer. I usually work through an idea a little at a time, mulling over various scenarios and permutations until I find something that I think would be interesting to explore.
Things like character names are particularly fun to toy with, and highly dependent on the setting. I wrote a “weird western” a few years ago set in the late 19th century. So I scoured things like lists of Civil War generals to get a sense of what names were popular 150 years ago. The fashions change from era to era of course, and in those days there were a lot of Biblical and Classical names being used. Today very few guys are named Jedidiah or Lysander, but back then it was pretty common. Once you have the names down it really gets you into the feel of things.

Do you work from an outline?
I definitely do, but I don’t always stick to it. At one time I did not outline at all, I would just start writing and see what happened. That was a messy way to do it, and I found that it was taking me a very long time to write a single piece, since I was constantly changing course, re-working the story, etc. These days I outline everything on the front end, but I’m always willing to deviate from that structure as things develop. So I take a sort of hybrid approach.

Tell me about your favorite scene in your novel.
Without giving too much away, there is a scene fairly early on in Rites of Azathoth that I enjoyed writing. It’s pivotal point for one of the characters, where he is just being introduced to this secret cult that worships the dark gods. The rituals he’s initiated into are violent and soaked with blood, but he’s very much aware that this horror represents a path to something he desperately wants. So he’s forced to choose—accept these twisted and obviously horrific practices or turn away and risk losing the chance to finally have the thing he wants most in life.
I love getting into questions like that. How much are you willing to tolerate to get what you want? How much are we willing to compromise in the service of our deepest desires?

Can you tell us a little about your writing philosophy?
This isn’t exactly revolutionary, but I’m very much from the school of “character first.” Everything proceeds from that, no matter what kind of fiction you’re writing. It all starts with interesting, flawed characters who confront their internal issues while also dealing with some external problem. You sometimes hear people say that there are only about seven basic stories that can be told. My thought on that is “who cares?” Because that idea misses the point. What you should always be doing as a writer is examining the human experience through the lens of a single character, who just happens to be embroiled in some version of one of those seven plots. The journey of that character is why you’re writing.

Have you ever tried writing in any other genres?
In a way, I suppose. I’ve written science fiction, fantasy and horror, broadly speaking. In each of those, I’ve tried to blend elements from different genres. In a larger sense, there’s an argument that all three of these are really just one genre: “speculative fiction.” If you look at something like The Twilight Zone that was not strictly a horror show or a fantasy show or even a sci-fi show, but from week to week the stories ran the gamut between all of them. So in a sense, I feel like everything I’ve been writing falls under this broad umbrella.
In terms of branching out into something very different, like romance or literary fiction, then the answer is definitely “no.” I just don’t know enough about those genres, because I’ve never read them. I wouldn’t even know where to begin.

Do you have any interesting writing-related anecdotes to share?
The book I released last year, Eye of the Storm, took place in a steppe society, very much like the ancient Mongols or Scythians. I always try to get as close to what I’m writing as possible, so in this case it gave me an excuse to do something I’d always wanted to do, to go trekking in Central Asia for a few weeks. Hopefully some of that comes through in the book, like the taste of fermented horse milk, for example. It’s better than you’d think.

Frank Cavallo’s latest novel, Rites of Azathoth, was released in January 2017, published by Bedlam Press (An Imprint of Necro Publications).

“Rites of Azathoth is an occult-thriller rooted in the H.P. Lovecraft tradition, or what is sometimes called the Cthulhu Mythos. It is a book that will appeal to general horror audiences, especially any fans of Lovecraft himself, as well as fans of Clive Barker, Peter Straub and Jack Ketchum,” says Cavallo.