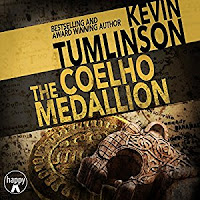 In an off-the-beaten-trail location in Colorado, near the borders of Texas and New Mexico, a team of archeologists has uncovered an ancient medallion covered in symbols from various native languages as well as what appear to be Viking runes.  Is this evidence that pre-Columbian European explorers interacted with Native Americans this far into the North American continent? Somebody seems to believe so, and when evidence of a previously uncharted underground river possibly connecting the site to locations further north is uncovered, the speculation and the intrigue kicks into high gear.

The book, The Coelho Medallion, is named for this artifact; the artifact is named for its discoverer, an Hispanic archeologist named Coelho (pronounced Quay-o.) The story is reminiscent of Dan Brown’s Langdon series, the Indiana Jones franchise, and a little bit of the National Treasure movies as well. There are bad guys, heists, chases, an unrealized romantic backstory, a rich playboy/adventurer hero, a damsel in distress, an FBI sidekick, and loads of twists and turns – and I’m not just talking about the underground river.

All of the tropes are present, but they are handled deftly and in a way that makes the story feel believable. Everything is told in a third-person omniscient POV, so we never leave our role as observer to become part of the action, and I personally like that. It’s more theatrical – which is just the mood a story like this requires. If the book has a weakness, it’s a dearth of strong female characters. There’s the damsel in distress, Dr, Evelyn Horelica, and the owner of a shady bar who is only in one scene and could just as easily have been a male character, but other than that the main cast of
players is a sausage party rivaling Twelve Angry Men.

The audiobook version is ably narrated by Richard Rieman. He has a rich baritone perfectly suited to the gravitas of the story without distracting from the mood. He sounds familiar and pleasant without sounding generic and chipper. He does, however, have a verbal tell in the way he pronounces the word “room” in what feels to me like a West Virginia accent. And the word seems to appear in the story an inordinate number of times. Most people probably wouldn’t even notice it. Well, you will, now, because I brought it to your attention, but otherwise…

Overall, I really enjoyed the experience, and if it was ever made into a film starring – oh I don’t know – Joseph Gordon-Levitt or Ryan Reynolds, I might watch it – eventually, on cable. Also, I understand that the character, Dan Kotler, is a recurring character with other adventures to his fictional name in the works as well as a prequel novella. Would I read or listen to those? Given the opportunity; absolutely. Would I seek them out though, that’s the real question.  They’re already in my Google Alerts cue.

It's time, once again, for the monthly promo hosted by Renée Pawlish. This weekend (May 13 & 14) features 99¢ mystery and thriller eBooks. There are nearly 50 books and a few box sets in the promo, so for under half a C-note you can own over 50 titles.

My own book, Common Sense, the second title in the Lupa Schwartz mystery series is included in the mix.


Common sense tells Cattleya Hoskin that her reporter ex-husband wouldn't have gone out night-fishing by himself in the middle of an investigation. The unaccommodating local authorities see it differently. In an effort to prove them wrong, Cattleya enlists the help of her private investigator friend, Schwartz, to follow through with Dave’s investigation—theft from the power grid in a small Ohio town.
The inquiry is complicated by crooked contractors, a menacing white van, and some long-abandoned coal mines and antebellum tunnels. Aggressively loud church bells and the amorous advances of a bounty hunter Schwartz brought in to help add to an already convoluted situation. Yet Cattleya feels she owes it to Dave to figure out what happened to him, for better or for worse.

You can find the promo and links to all of the titles at ReneePawlish.com/promo/ 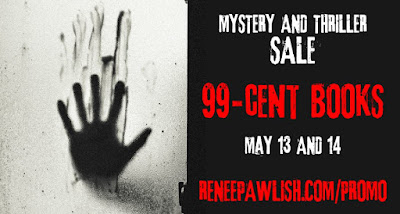 All of the final beta notes are back or coming soon. The ARC team has been sent their rough draft copies. Final edits will be completed in the next few days. Then on June 7th, 2017, my latest novel, my first full length thriller, On the Side of the Angel, will be available in paperback and through Kindle Unlimited and on Amazon for Kindle. A few weeks after, it will leave KU and it will be available in wide distribution on all channels; Kobo, iBooks, B&N, everywhere.

On the Side of the Angel is the first in a proposed series of novels featuring the Bartering Angel, a fixer with a private vendetta. The story arc for Angel is epic, beginning in Alaska in the 90s and moving through time and multiple locations to the present day, with each story representing a stop in her journey to revenge and vindication. Here's the description: 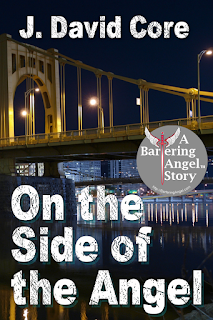 Lina Forman has an assumed name, a vendetta, a résumé of varied skills, and the knowledge to make her a force to fear.
Known in the criminal underground as The Bartering Angel, a mysterious “fixer” whose help keeps the bad guys out of trouble, she assumes the name Lina when she arrives in the Pittsburgh area in 2005. When the son of a local drug runner murders a convenience store clerk during a botched thrill robbery, Lina must keep him out of jail to prove her worth to the local criminal underground. Despite her elaborate scheme to confound the evidence and mislead authorities, two local cops threaten to disrupt her plans and steer the FBI on a path to avoid her red herrings.
Can Lina preserve her reputation and make good on her promises before she has to abandon her vengeance, change her name, and start again? Or will a careless oversight expose her secrets?

The eBook will be available for the introductory price of $2.99! You can pre-order now, if you are so inclined, at this UBL. As other installments in the Bartering Angel series are released by other authors, I'll keep you informed or you can check out the series' page at Bartering-Angel.weebly.com/
Posted by J. David Core at 8:07 AM No comments: