As well as a writer, Francis Yamoah is a Photographer and a Filmmaker with three short films under

his belt. In his spare time Francis likes to read, listen to music or watch his beloved football club Arsenal FC usually at the pub with his friends. Let It Bleed is his first novel but it is the second installment in his Lucy Collins series with the first being the novelette A Good Day. He lives in London.

Here's how he describes his book:


A BLOOD THIRSTY KILLER HAS TAKEN HIS FIRST VICTIM AND HE’S GOING TO KILL AGAIN.On what becomes her last day as a uniformed police officer, Lucy Collins discovers the body of a woman at a construction site while on patrol.THE INVESTIGATION TEAM IS FAST RUNNING OUT OF LEADS AND TIME.The next day Lucy gets the news she’d been waiting for. She’s been promoted to Detective and she joins the CID team investigating the murder of the woman whose body she’d discovered. But every hopeful lead comes to a dead-end with no new ones on the horizon.AND THE KILLER’S NEXT TARGET IS SOMEONE CLOSE TO THE INVESTIGATION TEAM.Let It Bleed is a thrilling second installment of a highly enjoyable series.

Who are your influences?
Stieg Larsson, Michael Connelly, Jo Nesbo and Lee Child all have influenced my writing but Elmore Leonard by far has had the greatest influence.

When did you begin writing?
I began writing when I was about 16/17 years old, right after secondary school when I started harbouring aspirations of becoming a film director. I just wrote short scripts then, some of which were really bad but I loved writing, I love starting and finishing a story. So I kept doing it and it naturally evolved into prose. I’ve read and loved crime fiction all my life so that’s just what I wrote when I started writing prose without consciously deciding. There’s no consistency in how I come up with my stories and characters, they all come about in different ways. My latest novel, Let It Bleed, for example came about when I read an article somewhere online about an American college student who went around shooting and killing a bunch of girls just because he felt girls have ignored him all his life and wouldn’t go out with him or something along those lines. What most shocked me about the article was the fact that in the comments section for article a few people agreed with what he’d done. So I started researching the theme crimes against women for the novel and the plot came out of that research. Whereas for my short story, A Good Day, which has the same lead character as the novel, the character and consequently the story came about when my mother fell ill and my sister went above and beyond to ensure her wellbeing.

Do you work from an outline?
I don’t write anything down in the form of an outline when I start because I only know just about ten percent of the story then if not less. I start with a theme I’d like to stick to or an idea of what I’d like to have at the end of the story but that original idea almost always changes by the time I finish. Unless I really close to finishing the story, I hardly ever know what’s going to happen beyond the next five or ten pages and the potential end of the story. The story constantly changes throughout the writing process so writing an outline for me will be a bit of a pointless exercise. The only thing I write down as a guide is what I’ve already written and need to remember.

Tell me about your favorite scene in your novel.
This is a tough question. Erm... I hope I’m not giving much away, but my favourite scene in the novel will have to be the scene where the main character, Lucy Collins, finds out that her father had died. I’ve chosen that scene for the simple reason that I got emotional and teared up a bit when I was writing it.

Can you tell us a little about your writing philosophy?
“Finish whatever you start” is my personal philosophy that I try to stick with but writing can demoralise even the most motivated person on the planet so there are two quotes from two great writers that I remind myself of every writing day to help me finish whatever I start. They are “If I waited for perfection I would never write a word” by Margaret Atwood and “Every book is the wreck of a perfect idea” by Iris Murdoch.

Have you ever tried writing in any other genres?
I only wrote dramas when I first started and was mainly writing short scripts but I’ve never written anything but crime fiction in prose. Maybe sometime in future I’ll try some other genre. 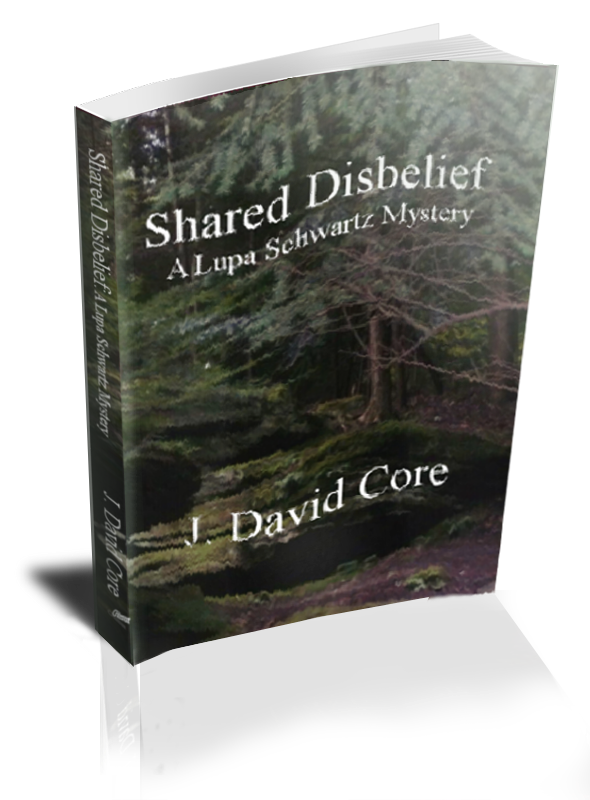 The paperback version and the kindle version of Shared Disbelief are now available. The Google Play and Nook versions are on sale until March 30. Get it for your eReader today for $2.99.

...creatively crafted by a superb pen. J. David Core is a master in telling a story with sublime English usage. His structure with words and sentences, I felt, are perfect in relaying his imagination to paper. ~ Buttonholed Book Reviews

The mysteries in the Lupa Schwartz books are always fascinating, and I love the interplay between Lupa and all the supporting players, Bev, Trevor, Mia, and all. Their dialogue is often witty and sometimes snarky, and that is fun to read. ~ Maryann Miller

A mystery thriller whose bone chilling plot brings chills down the spines of its readers. The suspense is out of this world. Readers will be trying to guess who the murderer is and why. A page turning incredible novel that will keep readers up late reading. Shared Disbelief is definitely one compelling story they won’t want to miss out reading. I highly recommend J. David Core’s novel to readers all over. His talent for writing the perfect mystery thriller will keep readers lured into his worlds forever. Overall, I rate this novel a five out of five stars.~ Danielle Urban

Get all the links to order your copy here.
Posted by J. David Core at 10:33 PM No comments:

Check out this cool pic

This image by my dear friend Brenda of 24 Jupiter photography and web design is now the header picture at my other website, thrillsandmystery.com.