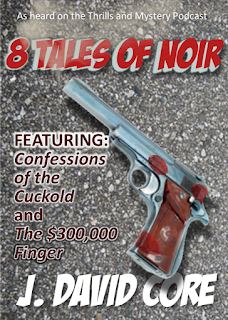 Season two of the podcast debuts in five weeks, and in the meantime, we are presenting interviews with some of the authors from season one. I had four noir stories featured in season one, and will have two more featured in season two. Then at the end of season two, I'll publish a collection of all of my stories from the podcast as well as two of my previously published noir novellas; Wingman and Confessions of the Cuckold. That book will be called 8 Tales of Noir and will be available in both paperback and electronic versions available for download on all of the major retailers. The current version of the cover is shown here. 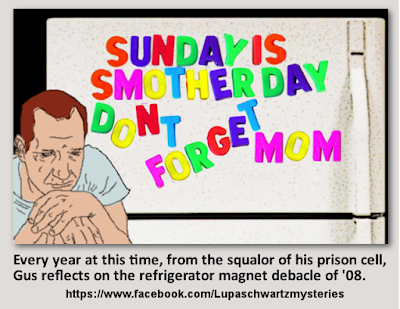 J.J. Chow writes Asian-American fiction with a geriatric twist. She has a gerontology specialization from Cornell University and a Master’s in Social Work with geriatric field experience. She lives in Los Angeles and is a member of Sisters in Crime. You can follow her blog and find more about her other writing at www.jenniferjchow.com

Her latest title is Seniors Sleuth. Here’s the book description:

Winston Wong used to test video games but has left his downward spiralling career to follow in the footsteps of Encyclopedia Brown, his favorite childhood detective.  When the Pennysaver misprints his new job title, adding an extra “s” to his listing, Winston becomes a “Seniors Sleuth.”  He gets an easy first case, confirming the natural death of a ninety-year-old man.  However, under the surface of the bingo-loving senior home is a seedier world where a genuine homicide actually occurred. Winston finds himself surrounded by suspects on all sides: a slacker gamer administrator, a kind-hearted nurse, and a motley crew of eccentric residents. To validate his new career choice (and maybe win the girl), he must unravel the truth from a tangle of lies.

Who are your influences?
1)     Agatha Christie: She was the author who started my love for mysteries. I have great memories of reading her stories together with my mom.
2)     Jean Kwok: She writes authentic Asian-American stories about struggling with identity and overcoming obstacles. I’ve met her both virtually and in person, and she continues to inspire and encourage me in my writing.
3)     Amy Tan: She really paved the way for Asian-American writers and helped me discover the intriguing aspects of my heritage. 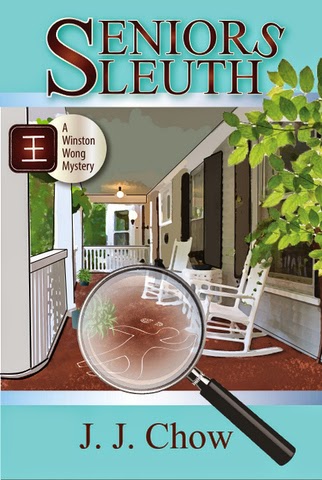 When did you begin writing?
I started creating imaginary adventures in my head as a little kid. This evolved into actually banging away on a typewriter in my elementary years. As I grew older, I edited newspapers, literary magazines, and other publications.

How do you come up with your stories, characters, character names, POV, etc?
By osmosis. Something from the real world will spark an image, a word, or a theme. Then it blooms organically from there. Often, though, I add in character names or traits from people around me. I wonder if they can tell…

Do you work from an outline?
Yes, I need to have some sort of structure. I usually have the beginning and end, along with the major conflicts. At the same time, it’s relatively loose so I can allow for sudden surprises that the characters give me. With mysteries, though, I do need to make sure I have a timeline and a chart with all the clues and red herrings involved.

Tell me about your favorite scene in your novel.
Wow, it’s really hard to choose. I must say, though, that I love the set-up. The main character Winston Wong wants to open an official detecting business, but a typo in an advertisement makes him a “seniors” sleuth, so an elderly client comes calling. (I also like when he meets Kristy, his love interest, and tries to win her over by dousing himself with Macho aftershave.)

Can you tell us a little about your writing philosophy?
1)     Sit in chair and write. Writing involves a lot of discipline, so it’s important to have a regular schedule of committing words on to paper (or computer).
2)     Read a lot of books. (Then go back to step 1.)

Have you ever tried writing in any other genres?
Yes, I tend to love writing different kinds of stories. It makes my brain feel flexible. My debut novel, The 228 Legacy, was multicultural women’s fiction. I also have a multicultural YA novel coming out at the end of the year.

Do you have any interesting writing-related anecdotes to share?
I felt like Winston Wong at a recent speaking event. All this tech trouble came to trip me up. What I thought was a simple Q&A event turned out to be a speaking engagement because of waylaid emails. Then the Internet wasn’t working for the venue, so I couldn’t download a needed video. Thankfully, I realized I had it attached to an email as well, and some kind soul helped to save the day.

You can get Seniors Sleuth from Amazon.