After a hiatus for much of the summer, The Thrills and Mystery Podcast is back for season 7. Although this season has a different purpose.

In the past, I've used the podcast to promote myself and other authors by producing audiobook quality podcasts of short stories. Then last season I changed things up and produced PG Wodehouse's classic, The Inimitable Jeeves, in episodic form. After the season concluded, I released the entire collection of episodes as an audiobook through Findaway Voices. This season, I'm doing a little of each.

I'm re-releasing remastered versions of the original stories I previously produced for the podcast which I authored, and later published in my collection 8 Tales of Noir. Each of those stories originally aired with royalty free music courtesy of Incompetech.com. However, I have decided that I am going to produce an audio-book version, and I wish to change out that music for original music by my late friend, Mark J. Miller. 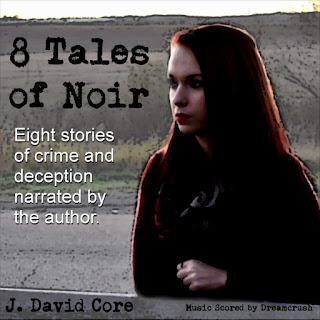 Mark was a writer, a musician, a singer, and a teacher. He died last year after a brief illness which was never properly diagnosed, but which quickly spread to his blood causing sepsis. His loss is still jarring. So in Mark's honor, I got permission from his family to use music he recorded for his one-man project which he called Dreamcrush. A portion of the proceeds will be donated to a local charity he was involved with called Team Mojo.

Team Mojo is an NPO which provides music lessons free-of-charge to underprivileged youth. You can learn more about them by visiting their website at teammojofoundation.org.

​Anyway, for the next several weeks, I will be podcasting the stories again, each re-leveled, cleaned up, and featuring the music of Dreamcrush. The first episode is available to listen to now.

George R.R. Martin writes fantastic thrillers. What did Alice have in Wonderland if not an adventure? Every epic fantasy is also an epic adventure, and every thrilling tale leads us to a world of imagination. Whether you fantasize about wizards and dragons or about spies and murder plots, you'll find your heart's desire in this promo.

This Saturday through Monday, Sept 21 thru 23, Double-Cross Lit will be hosting a 99 cent ebook sale. Stories might be straight up thrillers or exclusively Fantasy or anywhere in the middle. Either way, we'll take you on an adventure. And bonus! this sale featuring fantasy straddles World Hobbit Day.

Check out the sale at promo.doublecrosslit.com!