Just in Time for Halloween!

There's a brand new anthology of flash fiction with a Halloween theme available for FREE and it contains two stories by yours truly. You can get a copy of Monster Maelstrom for your e-reader now from Amazon, GooglePlay, B&N, Smashwords, with more retailers coming soon. Pick up a copy and leave us a review.
Posted by J. David Core at 10:54 AM No comments: Dane Cobain (High Wycombe, Buckinghamshire, UK) is an independent poet, musician and storyteller with a passion for language and learning. When he’s not in front of a screen writing stories and poetry, he can be found working on his book review blog or developing his website, www.danecobain.com. His debut novella, No Rest for the Wicked, will be released by Booktrope in
the Summer of 2015.

No Rest for the Wicked

When the Angels attack, there’s NO REST FOR THE WICKED.
Father Montgomery, an elderly priest with a secret past, begins to investigate after his parishioners come under attack, and with the help of Jones, a young businessman with an estranged child, Montgomery begins to track down the origin of the Angels.
When Jones himself is attacked, Father Montgomery knows he has to act fast. He speaks to the Angels and organises a final showdown where he’s asked to make the ultimate sacrifice.

My name’s Dane Cobain and I’m a writer. I also have a full-time job in social media marketing, which means – like most indie authors – I have a terrible work/life balance. During the week, I work from 9 AM to 5:30 PM, then I come home and carry on working on my writing until midnight. Over the weekend, I often write for 14-16 hours.
It can be difficult. The writer’s life is a sometimes lonely life, because they have to stay at home and tap away at their computers while their friends are going out and getting drunk. You have to learn to say ‘no’ when people ask you whether you want to do things, even if you’re sorely tempted., 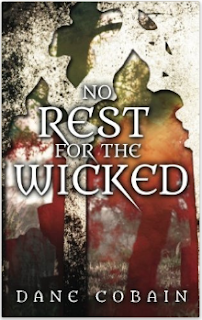 You have to figure out how to work as efficiently as possible. For me, that can be as simple as making notes on a new novel during my cigarette breaks at work, or as complicated as memorising poetry and listening to music while jogging or editing and answering e-mails simultaneously with a film on in the background.
And then, when you do go out and start socialising, you have to make the most of that too. It helps to have an all-or-nothing personality type, because if you don’t then you’re probably not going to last. But the problem with that is that you can overdo it, and if you don’t take time to rest then you’re at risk of a meltdown.
That happened to me a couple of years ago – I fell ill and spent two or three months needing to take a lot of time off work. Around that time, I was also diagnosed with anxiety disorder, and it’s the only time in my adult life that I couldn’t work. I hated it.
But then, writers are a different breed – we’re not happy unless we’re busy. Honestly, I don’t really ‘relax’ – I hate sitting still and doing nothing, and I actually find it more relaxing to work than it is when I sit back and do nothing with the TV on.
Everyone has a different way of working, and some writers are able to balance their writing with their family life, or to run a successful business at the same time. Writing is something that you can’t not do – if you’re meant to be a writer, you’ll be writing.
The key is to balance writing with the rest of your life. You need to figure out what’s important to you and prioritise your time accordingly. If you realise you’re spending too much time doing something you don’t enjoy – or if you’re not spending enough time on something you love – reevaluate and reprioritise.
In my opinion, that’s the key to achieving a healthy work/life balance. It’s not about balancing how much time and energy you put into work and life – it’s about making sure that you’re happy with your current ratio.
In fact, Bloomberg has made the (audacious but accurate) claim that work/life balance is dead, thanks to almost half of people working more than 40 hours a week and millennials taking on increased responsibility both at home and at work. And that’s just for ‘normal’ people! Writers are effectively working a second job in the evenings, whether they’re cranking out a first draft or whether they’re editing and marketing their work.
But that’s why writers are happy to skew the balance and to put more hours in than other people. They don’t do it because of the pay, because the pay isn’t great. They do it for the love of it, and that’s okay.
After all, they say that if you choose a job you love, you’ll never have to work a day in your life. Writing is a job, whether you do it for a living or not; but it’s a job that you can fall in love with. 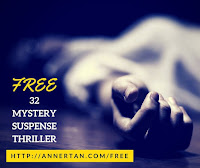 As I mentioned in an earlier post, I am including Five Secrets in an Instafreebie promo. The program is organized by writer Anne R. Tan and its sole purpose is to help the participants grow our newsletters. Newsletters like mine are the best tool authors like me have for connecting to our readers and becoming less dependent on the whims of the big retailers like Amazon and Barnes & Noble. With Instafreebie, readers get a free copy of an eBook in exchange for giving the writer their contact info and being added to the list.

So far, my list has grown entirely organically, but to be honest it's very small compared to many other writers, some of whom have been working on their careers far less time than I. So my hope is that by joining with other writers who work in similar genres, that they will steer some of their readers towards my list to help it grow. To that end, I would ask that you, my readers, would consider doing the same. Take a few minutes to check out the writers in the promo. Download any books you find there that seem appealing, and allow your email address to become a part of that writer's list so that he or she can remain in contact with you about future projects. Really, everybody comes out a winner that way. The three-day promo runs Oct 23, 24, and 25.

By now you're used to me telling you about the monthly Renée Pawlish Mystery/Thriller eBook sale program. This month features FREE deals, and none of the featured books have ever been featured in this promo before. So from now through Sunday, you can get my book, Shared Disbelief, for your kindle or kindle app as part of this program for FREE.

This is also the first time I'm debuting my new cover design in a promo. I'm hoping that the updated look will inspire some updated sales. We'll see. 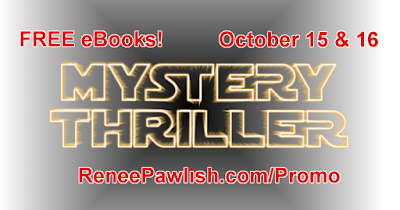