Sean Buckley only became an author by chance. In 2010 Sean was diagnosed with a particularly aggressive form of psoriatic arthritis. The rapid spread of which and the resulting struggle to combat pain and crippling joint damage led to Sean retiring from business life in 2013.

After spending almost thirty successful years working with some of the world`s leading brands and retailers in the fashion and outdoor industries, forced retirement came as a total culture shock. Unable to work in what he considered the traditional sense, writing by means of speech recognition software became a means to keeping his mind active. Sean writes from a unique perspective as someone who has lived and breathed in the cosseted world of the senior executive where life was the constant round of first class from one international fashion show to the next. Characters in the books often stay in the same hotels and eat in the restaurants all of which were once part of Sean’s daily life and are described with atmospheric detail.
Crime thrillers had always interested him so it was inevitable that this would be his chosen genre. The enduring mystery surrounding the death of the Italian banker Roberto Calvi appealed because of the sheer quantity of conspiracy theories that had evolved around the case. Several false starts later and after devouring information from books, newspapers and television a clear vision of the characters and how they interacted formed in his mind. The books have developed into a platform to explore the complexity of conspiracy theory. References throughout the books to the fleur-de-lis has resulted in it becoming something of a brand logo for Sean.
The successful publication of The Calvi Parallax in July 2014 was quickly followed by The Calvi Continuance novellas, Arlo Negri and Alex Bale in 2014. The latest book in the Ereptio Series, Quorum, was published October 30th 2015.
Sean has also released a very successful series of Adult Colouring Books after being introduced to the idea of mindfulness as a complimentary treatment to his own condition in early 2014.
Currently Sean’s books have sold in thirty-three countries around the world and despite having not been translated have sold extremely well in Austria, Germany, Sweden, Denmark and Norway.
Sean is married with one child and still lives in Manchester despite the climate and the effect that it has on his arthritis. A lover of sport in general, Sean is a lifelong fan of Manchester City and religiously attends games along with his family. 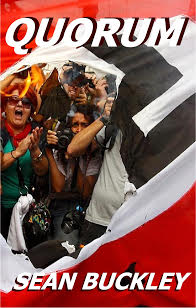 The Arab Spring that offered hope to millions has withered and died as civil war and terror engulf much of the Middle East. Russia has annexed Crimea and continues to support rebels throughout the Ukraine. In Gaza Israeli and Hamas forces continue to fight as the West increases the pressure on Israel to find a permanent resolution to the conflict. The war in Syria has ripped the country apart and a new Jihadist group calling itself Islamic State has emerged to control vast swathes of Syria and Iraq to dispense a barbarism not seen since the Middle Ages. The flow of refugees from the war ravaged areas of Africa and the Middle East increasingly resembles a tsunami of human suffering that threatens the very infrastructure of the EU. As the tentacles of terror touch its borders it seems like only a matter of time before the West is drawn into what could develop into a new World War. When Gianfranco Molinari of the newly formed European Financial Bureau, gets drawn into investigating the seemingly obscure murders of two men in the quiet Danish city of Odense it soon becomes apparent that he is in a race against time where the very existence of Europe as we know it is at stake.

Friday 13th November 2015 is a date that will be etched into my mind until the day I die. I, like all rational minded people was shocked and appalled as I watched the events unfold on my television. Unfortunately, that is not totally true. I was not shocked. I was just shocked that what I had written two or three months earlier seemed to be unfolding before my eyes. I was hit by a wave of self-doubt. The book. My new book. The one I had researched, nurtured, written, then re-written time and time again until the words on the page fitted with the pictures in my mind, that book. It was only a story but did I have the right to profit from something that so closely mirrored the events in Paris. It was my baby, over a year`s worth of work and I wanted it out there but the thought that people might think I was trying to profit from the pain of others had me on the verge of pulling the book from sale. Finally, I turned to a community of UK writers and asked them the question. The response from them was unanimous, with no deliberate intent to profit from the atrocities the book should remain published.
Hindsight is a wonderful thing. So now not much more than a week later I`m pleased that my book is out there. It poses questions of ethics, morality and jurisdiction of the characters. It is those same questions that our politicians now face. In the book I make reference to a fictional military operation and then on Sunday I read the article by Jimmy McCloskey, published in the Daily Star titled, “SAS hit squad to wipe out ISIS: UK, US and French forces to pick off terror nuts”. I thought this should worry me but it didn`t. It was then that I realised that the people whose advice I had sought were right. The book should remain published. In fact, it is my duty as a responsible citizen and member of society to publish my work. I like many other authors am free from the constraints imposed on journalists by editors, by publishers and media owners. If reality is to mirror fiction, then fiction writers need to write and be read. Extremism in all its forms, political, religious, xenophobic, abhorrent or not, must be explored by those of us not burdened by censorship. I will leave you with a famous quote, one that seems appropriate under the circumstance. It is often attributed to the Eighteenth Century politician and philosopher Edmund Burke but the origin is less important than the message.
“All that is necessary for the triumph of evil is that good men do nothing.”

Box Set Coming for the Holidays

At the end of December, I will be releasing my first digital box set. It will contain volumes 2 thru 5 of the Lupa Schwartz series and will be available exclusively on Amazon for the Kindle for three months. The cost will be $9.99 however members of Amazon Prime will be able to download it for no additional cost. Considering that volume ONE is already free on Amazon, this means that Prime members can own the entire series to-date for no additional cost. Basically you can get the entire series for FREE with your Prime membership!
Posted by J. David Core at 11:49 AM No comments:

8 Tales of Noir: As Heard on the Thrills and Mystery Podcast 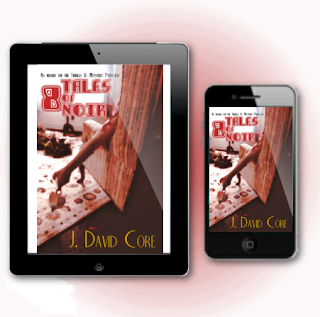 8 tales of Noir is just what the title would lead you to expect, eight stories about the darker side of the human condition.  Six short stories lead in to two novella length tales. 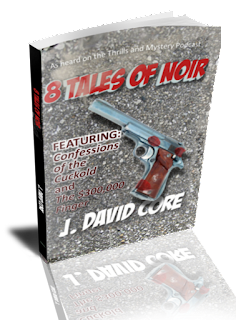 ·   Two desperate men at a standoff on a residential inner-city street...
·   A high school prank with unexpected - and deadly - results...
·   When you grab the wife of a small-time construction company owner for ransom, make sure he's not from the family...or smarter than you...
·   A man intent on collecting a debt…
·   A heist gone wrong…
·   A prodigal son whose sins follow him home...
·   A moment of reckless anger puts a sad-sack on the wrong side of the law and leads to an unexpected comradeship with the forlorn bounty hunter sent to bring him in.
·   Finally, a high school dean, a construction worker, and an off-duty cop head out for a night on the prowl. When each agrees to seek out and introduce another of the trio to his ideal woman, only the annoying fly that keeps buzzing the table is privy to all the behind-the-scenes goings on in this quirky black comedy.

Listen to an excerpt here.
Posted by J. David Core at 9:58 AM No comments: