Author Alexa Kang is hosting a fantastic Black Friday Sale featuring romance titles, holiday themed stories, and yes, mysteries and thrillers. You'll find all of the details on her site at alexakang.com/holiday99cbooksale/

FYI, my latest book, On the Side of the Angel, is also included in this sale. The sale continues through November 28th.

I don't have a book in this one, but Renée Pawlish's monthly promo featuring 99¢ mystery and thriller eBooks is this weekend. Visit this link for nearly 40 titles each available for less than $1. 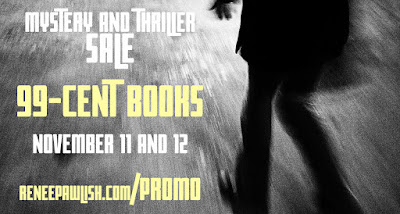 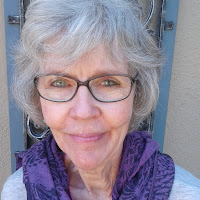 A six-month leave of absence to write fiction that entertains turned into a full-time career. PRINCE OF FROGS and QUEEN of the UNIVERSE, romantic comedies, were her first published novels. Two romantic suspense novels followed: PRESUMED GUILTY and UNRAVELED.
She now writes her passion—psychological suspense. Three novellas and three novels comprise her first series, THE MISfIT. Ever wonder about the twisted childhood of Hannibal Lector? Read the novellas and meet Michael Romanov—different, destructively different from birth.
Ever wonder about the pernicious influence of a grown-up misfit? Read the novels and follow the consequences of Michael Romanov’s conviction of his uniqueness.

AB lives just off the fast-lane in Silicon Valley with her husband. Reading, hiking, aerobic dancing, and participating in debates about hot-button topics propel her imagination toward murder.
She loves hearing from readers and getting their input. Contact her at ab@abplum.com.
From time to time, she makes special offers to fans (FREE books or a reader-author interview or an unpublished story or a behind-the-scenes clip). Learn more here.

The Misfit: The Reckless Year (book 4)

A psychopath goes after what he wants and deserves…
Against all reason, ruthless Silicon Valley tycoon Michael Romanov, becomes infatuated with a totally unsuitable, but bewitching woman. Will he stop at murder to sweep her off her feet?


STOP: Memoirists, playwrights, scriptwriters, poets, biographers, lyricists, journalists, academics, and all other non-novelists need read no further. The audience for these ramblings is fiction writers—real writers.
Why? Why real writers?
Because all those other writers (legitimate every one) can use photos, sets, actors, charts, music, figures and other devices rarely used in adult fiction. Novelists rely on one tool—words.
Words, some biologists and most people, believe separate us from all other animals. Yes, animals may emit whistles (whales) or yodels (coyotes) or meows (cats) or quacks (ducks) or buzzing (bees) or growls (bears, big cats, and badgers) or screeches (bats and some birds) or “songs” (birds). They may vocalize with their kind quite effectively. But … words. Words are reserved for us humans.
Most homo sapiens begin making recognizable words from early childhood. Babies’ first utterances 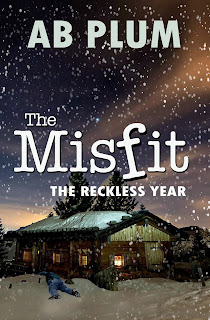 usually generate verbal expressions from parents of surprise, gratitude, and pride. It’s as if no one in the universe has ever accomplished such a deed. At the other end of life’s spectrum, words often escape the dying. Maybe by then we’ve used up all our words. Maybe we’re tired. Maybe we’re in pain. Maybe we just damned well don’t want to yammer about facing the Great Unknown.
Many a novel has been writ on this subject.
We writers capture feelings and paint people, places, and things with the only concrete tool in our toolbox. We grab the reader’s imagination, opening up contradictory and complementary views of life.
We invent new worlds or resurrect old realms with a few well-placed syllables. We embroider fact and produce fiction.
We fabricate characters with originality and verve. We entertain, hoping no reader ever skims the precious words we’ve set down on the page. We elicit laughs and mine for tears. A few simple words in a well-developed story with unforgettable characters in a tough situation can transport and transform readers.
Storytelling lets us explore, extoll, and expand big questions with gusto or quiet restraint:
Why does a character commit murder? (Crime/Mystery/Suspense/Thriller)
How likely is “happiness ever after” between two humans? (Romance/Inspirational/Comedy)
How do we survive the death of a loved one? (Tragedy/Melodrama)
How can humans communicate with vampires/werewolves/zombies after the Apocalypse?
(Paranormal/Urban Fiction)
How will humans react meeting an ET in outer space? (SciFi)
How can guys who ride horses ever transition into modern society? (Westerns)
How can women look at their lives and families and find fulfillment? (Women’s Fiction)
Words are the common denominator. Sometimes they come with ease and fluency. Sometimes they elude us like fairy dust. Sometimes the words are fine, but we have to change the syntax. Too many sentences run together in dialogue (or narrative) reduce the power of the utterance and the eloquence of the written word. We can mangle grammar, but the result may confuse and lose the reader.
Confession: I am an unabashed logophile. Reading gets the credit. My parents weren’t educated—though my mother read and encouraged my reading—neither ever encouraged vocabulary building. Since I always read beyond my age level, I learned early to use the dictionary. Discovering a word I’d run across originated in Greek or Roman set my imagination on fire. Lavatory, for example, stemmed from lavare—which sounded so much more exotic than to wash. To this day, I love taking vocabulary quizzes and feeling smug when I tally my score. I often chase after the meaning of [un]common sayings like going to hell in a handbasket for fun. (Spectator sports rarely claim my attention).
Now having made my argument for words, I’m going to play devil’s advocate.
If allowed ten books during exile on a desert island, I would choose nine children’s picture books.
Not because of the words (usually few).
Because of the illustrations. They usually go beyond words on the page. The best ones are as powerful as words. The best ones speak volumes (an apt cliché, IMO) in a few pages. The best ones can make reading the story redundant. Notice the caveat “best.” Best makes the difference and often costs enough to reflect the quality that has gone into the illustrations. The picture books I’m talking about are works of art. They need no words. The drawings or paintings or mixed media speak.
I’ve recently discovered two children’s illustrated books to add to my collection of over a hundred titles.
Duck, Death and The Tulip by Wolf Erlbruch, an award-winning illustrator. In this case, he is also the author. He is well-known for collaborating on humorous picture books like The Story of the Little Mole Who Knew It Was None of His Business. The pictures tell you the story.
Cry Heart, But Never Break written by Glenn Ringtved and illustrated by Charlotte Pardi received the ALA 2017 Mildred L. Batchelder Award after its original Danish publication in 2002. The illustrations will etch Death into your imagination forever.
These two picture books have become go-to sources for reflection and inspiration in my own writing.
The MisFit Series follows the dark journey of a child psychopath. The words portray a bleak life, and sometimes I need a break. A variety of illustrations give me that break and the will to keep writing.
So, from one logophile to another, I highly recommend investing in a couple of quality picture books to go beyond the words you write. As Nicole Krauss says in The History of Love, "I’ve learned “… there isn’t a word for everything.”
Posted by J. David Core at 10:32 PM No comments: