Magnified and Sanctified is NOW Available!

As of December 31, Magnified and Sanctified is available in ebook, paperback and audiobook! For now, the ebook is only technically available in Kindle Unlimited's subscription model or for purchase on the Amazon website. But I'll let you in on a little secret. It's still available for free as an ARC at this link. Or, you can preorder the ebook now on a number of sites. It will be ready for you on April 1.

The audiobook is available at a number of sites as well, such as Google, Amazon, Audible, Chirp, Kobo, Scribd, and more. Some sites are taking a little longer to put the story up, but it's been released to everyone, so if it's not up in your favorite audiobook channel yet, it will be very soon.

There's even a paperback version available.

Each version has it's own unique cover that perfectly captures the mood of the story for that format. 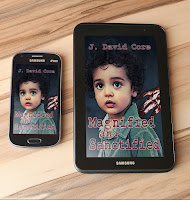 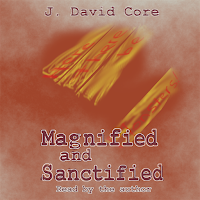 Once again, here's the story description:

In the first year since the start of the zombie apocalypse, Andrew Moore and his young daughter have struggled to survive.Something is turning people into undead reapers. As monsters patrol the streets in search of unwitting recruits for their army of shambling sirens, Moore and his daughter are making their way toward the Atlantic coast in hope of refuge on one of the government’s offshore sanctuaries. Meanwhile, Mark Bell has been stranded alone in the relative safety of a defensible state park. He has learned to survive and thrive despite the constant threat from the menacing masses of wandering undead.
As winter looms, the two men meet, and they decide to band together in a compromise plan to sail into Lake Erie; but can they survive long enough to reach their goal, or will the peculiar stranger they meet along the way put their chances of survival at risk?