I know all of you like mysteries and thrillers, but if you're like me you also love a good fantasy story. And since both of my series involve a strong female protagonist, you probably also enjoy that in a story as well. So you will certainly enjoy this book by a fellow indie writer, Blade's Edge by Virginia McClain. 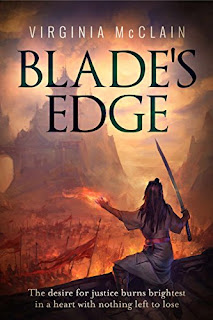 Mishi and Taka live each day of their lives with the shadow of death lurking behind them. The struggle to hide the elemental powers that mark the two girls as Kisōshi separates them from the other orphans, yet forges a deep bond between them.
When Mishi is dragged from the orphanage at the age of eight, the girls are unsure if or when they will find each other again. While their powers grow with each season-cycle, the girls must come to terms with their true selves--Mishi as a warrior, Taka as a healer--as they forge separate paths which lead to the same horrifying discovery...
The Rōjū council’s dark secret is one that it has spent centuries killing to keep, and Mishi and Taka know too much. The two young women have overcome desperate odds in a society where their very existence is a crime, but now that they know the Rōjū’s secret they find themselves fighting for much more than their own survival. 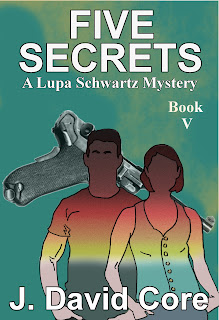 Recently my girlfriend's adult son and his girlfriend, Tess, moved in with us. One night Tess and I were chatting, and I began describing for her the conspiracy theory I made up as the foundation of my novel, Five Secrets. I explained how I rooted the conspiracy in the same historical "theories" that form the basis of the plot of The Da Vinci Code and the National Treasure movies, how the geography and the landmarks and history I borrowed to flesh out my concept are all true to reality, and how a video I made several years ago describing the theory (complete with a skeptic's note at the end) had made its way onto several conspiracy chaser websites.

When I finished, she told me that even though I explained that the conclusion I drew was nonsense, the evidence was so compelling that it left her with a feeling of "Maybe though."

This got me to thinking that I should write another non-fiction book debunking my own fictional account in the vein of The Da Vinci Hoax, a book put out by Catholics concerned that the Dan Brown novel's premises might lead their flock astray. My take, however, would be broader in scope. I plan to first describe the evidence for my own "theory" in earnest, only debunking it afterward in the broader context of the need for skepticism and the dangers of earnest credulity.

I also hope to construct a PowerPoint/Ted-Talk-style presentation in which I lay out the evidence in context, and then challenge the audience to tear it apart, finally concluding with my own dismissal of the theory I invented and a challenge to any audience members who have bought into such ideas as: false-flags, Cryptids, science denialism, trutherism, etc; with a skeptical eye, because if I can invent a compelling conspiracy theory from scant evidence and wishful thinking anyone can.

I'm working on the PowerPoint now, and when finished I'll create a video of it to share with followers of my newsletter. So sign up now. Link in the sidebar.

So that's my current project. I'll keep you all updated in future installments on this blog.

P.S. For a limited time you can download Five Secrets, the novel that started it all, from Amazon for just 99¢
Posted by J. David Core at 11:04 AM No comments: 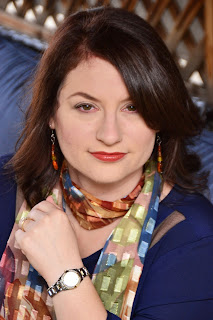 Shari Lopatin tells stories that matter. An award-winning journalist in her earlier years, she now writes complex and stimulating suspense novels that tie into modern-day social issues. Shari has worked as a newspaper reporter, magazine writer, public relations professional, social media manager, and earned the title of “Cat Mom of the Year.” Her debut novel, The Apollo Illusion, is coming out May 19, 2018. Digital copies are now available for pre-order. Learn more at www.ShariLopatin.com/books.

The year is 2150, and bullied nineteen-year-old Flora can no longer ignore the burning curiosity to learn what’s behind the towering Wall surrounding her home state of Apollo. Citizens still read books, discuss philosophy, and send text messages, but questioning The Other Side is forbidden.
When Flora’s naïveté accidentally reveals a dark secret about Apollo, she’s forced into an isolated web of truth, lies, and survival. Fearing for her life, she leaves behind a clue for her childhood friend, Andrew, placing her last hope in their special bond.


Who are your influences?
My primary influences in creative writing have been George Orwell, Aldous Huxley, Margaret Atwood, Judy Blume, and more recently, Junot Diaz.

When did you begin writing?
I've been writing for as long as I can remember! I wrote my first short story when I was seven years old about a group of aliens who befriended a girl on earth; they all had names of food items, such as "Butter." However, I began writing professionally in 2005, after I graduated from college with my bachelor's degree in Journalism. I started my career as a daily newspaper reporter. 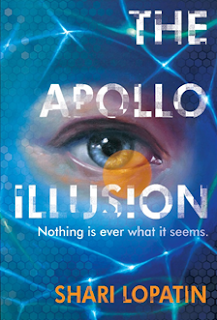 I tend to write about things for which I feel passionately, or a topic that really gets my blood flowing (in either a good or bad way). For example, I came up with the idea for my current book, "The Apollo Illusion," while having dinner with my mom, sister, and boyfriend. My mom commented on a news story she'd watched that reported how babies are learning the swiping motion of a tablet before they learn to speak. We started discussing the societal repercussions of a generation brought up with that foundation, and the idea for my book sparked. I'd been watching the effects of social media on my beloved profession of print journalism as well, and had been contemplating issues around the rapid advancement of technology. That conversation with my family was the prompt I needed to finally start writing. On the other hand, I developed the idea for my second book, which has been completed but not yet published, after years of working in healthcare communications and witnessing certain scenarios that upset me.

Do you work from an outline?
No! I cannot work from an outline. I always have a general direction that I'm running toward as I'm writing, and I may have some plot points in my head, but I let the characters (and therefore the plot line) develop organically. Sometimes, my characters surprise me by their actions or the things they say! I've actually come up with some exciting plot twists this way. I need to allow my creative energy to flow without too much structure. I can always fix things later, perfect the character development, or improve the story arc during the editing process.

Tell me about your favorite scene in your novel.
My favorite scene in my novel, "The Apollo Illusion," is actually one of the surprise plot points, so I cannot talk about it! But it's a very emotional discovery in the book, one that I cried while writing. Without giving away spoilers, this scene deals with a theme that I value deeply: family. And I think in a way, I was writing a "wish" that I have for someone in my life who I love, and this was my way of waving my magic wand and giving this person something in my story that I know will not happen in life.

Can you tell us a little about your writing philosophy?
Maybe it's the journalist in me, but I aim to tell stories that matter. I like to say that a great story can change the world, and I think solid writing should aim to convey a higher truth and prompt readers to think deeply about their views on a subject. I like reading books that are not only entertaining, but explore aspects to life or issues that help me understand them from another's perspective. I like writing and books that challenge me, connect me to their characters, and force me to think on a multidimensional level. For these reasons, I prefer to write about topics that tie into modern-day social issues.

Have you ever tried writing in any other genres?
I sort of fell into writing suspense by default, but my second book is closer to a literary/contemporary suspense or dramatic work, than to a dystopian suspense/science fiction. So I guess the answer to this question is yes!

Do you have any interesting writing-related anecdotes to share?
Hahaha! I don't think so; I probably "talked" my head off with anecdotes already, in my answers above. I just really appreciate the opportunity to talk about my writing and share the love of this craft with other fellow writers!

To Connect with Shari: