First and foremost, I want to convey my deep appreciation to JD (Dave) Core for giving me the opportunity to tell my little story on his site. 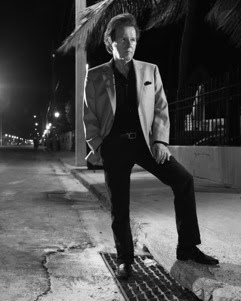 And what a story it was! Well, for me, anyway. Since my latest reinvention of myself (and there have been many over the long years) as an audiobook narrator, I was hot to move up the ladder. Of course, I didn't kid myself. I knew I had to have a worthy product ¾ skillful storytelling, quality sound production, and knowledge of my own strengths and weaknesses as a narrator ¾ if I was to achieve any success at all. The first thing I learned was the learning curve is steep.

So after a couple of years, I get a handle on sound crafting and I hone my natural ability to tell a story. Then one day in the summer of 2014, I was trolling Amazon and came across Mickey Spillane's I, The Jury. The cover was typical Spillane: a gorgeous doll coming out of her clothes while a guy holds a gun on her. Then ¾ whoa! ¾ I noticed there was no audiobook attached to it.

Positive I had made a mistake, I looked again. No audiobook. I went to Audible.com and typed in the title. No results. There was an audiocassette on Amazon dating back to the Paleolithic Era for sale by a third party vendor, but no modern downloadable audio version. Could this be true? I, The Freaking Jury, the first Mike Hammer novel and the biggest selling book of Spillane's entire career, does not appear in audiobook form?

Well, it was true, all right. I looked up the other Hammer books. Nearly all of them were available as audiobooks and those were all narrated by Stacy Keach, who played Mike Hammer on TV for years. I mean, the guy is Mike Hammer!

I set out to become the narrator for this novel. First, I had to find out who held the audio rights. I wrote to my friend Max Allan Collins, novelist and Spillane collaborator, and he essentially told me to forget it. Simon & Schuster had the audio rights to all the Hammer novels, he said, and they had released them with Stacy Keach's powerful voice driving them. He said it would probably be just a matter of time before they got around to I, The Jury. 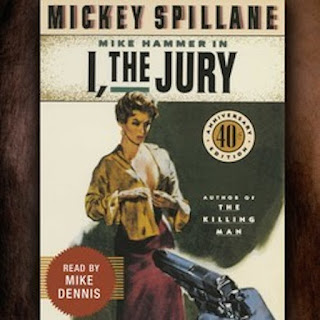 Okay, not good news. But I kept after it, anyway. Fruitless efforts at contacting Simon & Schuster yielded nothing. After a lot of digging into the bowels of their website, however, I turned up the name of the head of their audiobook division. I called S&S, asked for him, and to my surprise, I had him on the line.

Once I collected myself, I explained who I was: an audiobook narrator/producer operating out of my home studio in Key West, and I wanted the chance to narrate and produce I, The Jury.

Now, this is the point where a guy like him would tell a guy like me, "We don't work with home studio narrators," or "We use movie stars to narrate our audiobooks," or "Buzz off, kid." And you know, you couldn't blame him if he did. Not even I could blame him. But instead, he said, "Do you deliver a finished product?"

Knowing that I had now arrived at my date with destiny, I said "Yes. But how about if I send you a brief recorded excerpt of I, The Jury? That way you can not only get an idea of how I would approach the material, but also of my sound quality." He paused for what felt like forever, then said, "Okay." And he gave me his email address.

I carefully prepared a recorded piece from the novel and sent it off to him. Frankly, though, I was sure that the minute he hung up the phone, he was shouting into his intercom, "Get me Stacy Keach!"

A couple of months went by. I was certain the game was over. But one day I opened my email to find a response. He had sent my sample to the head of their production department for her opinion. My God, I still had a shot!

Two more months go by (they sure move slowly up there in New York), and one day I get an email from the head of S&S audio production. She liked my sample, but she asked if I wouldn't mind submitting a finished version of the entire first chapter, so they could get a better idea of my sound and my consistency, as well as how I would handle more dialogue. I really couldn't believe it!

Of course, I did the first chapter, laboring over it lovingly and with great precision. Another month later, she writes back and offered me the job. We agreed on the terms and I narrated and produced the audiobook. It'll be released in unabridged form Wednesday, July 28. And you know, I still can't believe I'm actually the voice of Mike Hammer.

Available for pre-order now on Amazon.  http://tinyurl.com/p6et4qp
Posted by J. David Core at 11:15 PM No comments:

Today is the day that Five Secrets comes out. In honor of this momentous occasion, I have decided to post five secrets about Five Secrets. What follows are five previously unrelayed facts about the novel I've been working on for close to a decade.

5 - T.D. Mercury's gender swap. The character of T.D. Mercury was conceived as a man. The made-up book T.D. Mercury wrote, The Green Table, is referenced in all of the preceding four books in one manner or another. At the time I wrote the previous books, I knew that Trinidad Darren Mercury was going to materialize in this installment of the series, but I had no idea what role T. D. was going to play in the plot. It wasn’t until I began outlining the story that I realized that T.D. was going to be a member of the Shossling family, and that she would be a woman.

4 - Why Shossling? In the book, there is a family named Shossling who are members of an underground "New World Order" controlling dynasty. The name Shossling means sapling in German. I chose the name because of a French family known as the Plantards. A member of that clan claims that his family is part of a long-standing branch of the Morovingian dynasty. The word “plantard” is French for sapling.

3 - Patriarch swap! In the first book in the series, Extreme Unction, we are introduced to a neighbor of Schwartz’s named Zvi Moreck. The only thing we know about him in that book is that Schwartz doesn’t like him. He was initially conceived to be revealed in this book as the ultimate head of the secretive dynasty. His name is an amalgam of Moriarty, the villain from the Sherlock Holmes stories, and Zeck, the villain in the Nero Wolfe stories. However, although he remains a character in book one, I abandoned the idea of making him an arch-villain before I completed that first book, and the character has not appeared in any of the stories since. However, he will be making an appearance in the next book, a collection of short stories tentatively titled Hard Boiled. I won’t say more now, except to say readers may learn a little more about why Schwartz dislikes him.

2 - Schwartz's fat disguise. All of the books in this series carry on the conceit that Schwartz is the grandson of Nero Wolfe (the detective in a series of mystery novels by Rex Stout) which is itself based on the existing theory that Wolfe was the son of Sherlock Holmes. In the middle of this book, Schwartz allows himself to grow morbidly obese as part of a disguise when he goes undercover.  This idea was itself borrowed from both the Holmes and Wolfe canons. Holmes has an obese brother named Mycroft, and Wolfe is himself morbidly obese. However, Holmes is extremely svelte and it is hinted that Wolfe was at one time quite thin. Therefore Schwartz’s ability to quickly gain and lose weight is an inherited family trait. His willingness to transform himself for a case is also a nod to Holmes who frequently altered his own appearance – often times quite drastically.

1 - Why flowers? The cover for the paperback version of this book was shot at the Phipps Conservatory in Pittsburgh by my girlfriend. The books are set in Pittsburgh, so I thought it fitting to use a photo shot there; but the photo contains a very specific breed of flower. The yellowish white flowers and the pinkish flowers above them are orchids, a breed of flower favored by Nero Wolfe who grew them in specially built greenhouses on the roof of his Manhattan brownstone. So the cover is a double homage.

For more info on Five Secrets and all of the other books in the series, click here.
Posted by J. David Core at 6:00 AM No comments: