Dean Klinkenberg is the author of Rock Island Lines, a new mystery series featuring Frank Dodge and Brian Jefferson. He also writes the Mississippi Valley Traveler guidebooks and blogs about the river at www.MississippiValleyTraveler.com. Klinkenberg lives in St. Louis.

Frank Dodge is in over his head. A writer, he made the trip to the Quad Cities to pursue a story that sounded too good to pass up, a story about the legacy of a big character from a Mississippi River town, a brutal gangster named John Looney. Looney got rich as the ruler of the Quad Cities’ underworld in the early 20th century and created a national crime syndicate long before anyone heard of Al Capone or Meyer Lansky. Dodge is a freelance writer and lives from paycheck to paycheck and needs the story, needs the cash.

Dodge has heard that Miguel Ramirez is probably a descendant of Looney. Ramirez was raised in south Texas, near where Looney died, and came from a family and an area that presented many opportunities to get in trouble, which he took advantage of. Ramirez moved to the Quad Cities for chiropractic school, to turn his life around. He’d be the first Looney descendant to come back to the Quad Cities since the 1920s.

Dodge calls his best friend, homicide detective Brian Jefferson, to help him clear his name and to figure out what actually happened to Ramirez. When Jefferson arrives, Dodge reveals how he met Ramirez and how the two got along well enough to drink their way across the Quad Cities and through the night.

The FBI also has an interest in the murder, in Ramirez. With local police and the FBI investigating the case, the pressure is on Dodge to tell everything he knows, everything he did. While Dodge won’t get his story about a Looney descendant coming back to the Quad Cities, the story of John Looney just might have the clues that will prove his innocence and save his life.

Where we live shapes how we live. This is not a great insight on my part, but I think it’s something that many fiction writers don’t do enough with. There are exceptions. 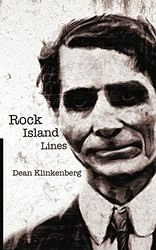 In Northwest Angle, for example, William Kent Krueger sets a mystery in the remote corner of Minnesota where the characters live on the water (or ice) as much as they do on land. It’s a place where people have adapted to the short summers and the brutal winters, where self-reliance isn’t just an abstract political value, but a set of skills necessary for survival. While the characters we meet may be geographically isolated—there is no coffee shop where they can meet for a chat every morning—they are connected to each other anyway, through family or cultural bonds. They know how to get in touch in a pinch, even if it means taking a boat for a half-hour skip across the Lake of the Woods.

The place where they live, the Northwest Angle, is part of what defines who they are and how they live. Knowing something about that place is as central to understanding the characters as is learning what they think and do. In fiction, however, some writers treat place as nothing more than a table setting. It can be so much more.

Places have depth. Maybe when we think of places with layered histories, we think of European cities like Rome or Athens where building a subway requires digging through thousands of years of the past. All of our places, though, have complex histories, if we take the time to explore them.

A previous house I lived in, a century-old three-story Victorian beauty in St. Louis, had over 90 years of human history that included several deaths and an owner who stored his Harley in the foyer. That house would be a great vehicle to trace the rise, fall, and return of urban neighborhoods, following its residents as it transitions from a home for a wealthy family in a new subdivision to urban pioneers in a declining area to middle class couples in a gentrified neighborhood. But even before that house was built, that place had a history. How many native peoples walked across, fought on, or loved on the land my house occupied in the past 10,000 years? How was their experience of that place similar to or different from mine? How has the place I know been shaped by the people who were here before me?

Where we live, the world around us, shapes us, sometimes in obvious ways. If I lived in San Diego, I imagine I’d be tanned most of the year, my friends and I would exchange ideas on new uses of avocados, and at least some of my social life would take place on a beach. If I lived in northern Minnesota, I’d know a thing or two about curling and how to operate a snowmobile, my social life might revolve around swapping recipes for hotdish, and my friends and I would express our gratitude that, however bad the weather was that day, it could be worse. Just imagine how living in those two different environments might shape the psychological and social lives of the people who live there. Are you more likely to be an optimist if you lived your life in San Diego? Are you more resilient than other folks after living through a couple of decades of winters with little sun and sub-zero cold?

I write about the Mississippi River and environs, so I have no shortage of great places to work with. There are many towns right on the river and people who live in a wide range of housing situations, from blufftop mansions to homemade houseboats moored to shore. It’s easy to imagine that the people who live in those different abodes don’t lead the same kind of lives and probably see the world in very different ways, too.

In the novel I’m writing now, Double Dealing in Dubuque, one of the characters, Big Dan, lives in a cabin in the backwaters of the river. While many people see the river as a place to go for a few hours of recreation, it’s Big Dan’s world. He doesn’t just inhabit the floodplain forest, he’s a part of it as much as the fish and the birds. Years of fishing and foraging for food have shaped his values and how he sees the world and his place in it.

I had a lot of fun writing about Big Dan. I challenged myself to bring out the relationship between the man and the place he lives in, but I wrote with a light touch. It would be easy to end up with a caricature—he’s just Grizzly Adams by the river!—or make him as interesting as a floodplain cottonwood. He has to be more than a collection of driftwood and hawk feathers but those objects can also speak to his character and how he relates to the world around him.

The world we live in impacts our lives in ways small and profound. Fiction is a great place to explore that dynamic, to go deep into the interplay between place and character.

What are some of the most memorable places you’ve come across in fiction?

Find more works by Dean at his Amazon author page, on Goodreads and through Twitter he's @MissValleyTrav.