Robert Skuce thought that he was too pretty and small for prison so he decided to write about it instead. After dabbling in different genres, he found himself at home as a thriller/crime writer. A man, who was born and raised in Eastern Ontario, Canada, in a small town, he decided to try his hand at creative novel writing. Turned out, he loved it and kept writing to improve his craft and is now the writer he is today. He enjoys a good mystery and once in a while he likes to go back to horror when it was simpler and less complicated then you find in this day and age.

Currently living in Southern Ontario with his wife and four kids, he enjoys long walks, time with his family and lazy afternoons getting caught up on television. He loves playing with computers and is the household personal IT technician. When he goes out, you can find him exploring the different restaurants his city has to offer and driving in the country side.  He is always looking for new places to be the basis of his books. He photographs abandoned buildings and unique parts of town in order to create a sense of realism in his books.

Filled with ideas and personalities that are unique, he is always coming up with a new and twist-filled story that will make its way to the pages everyone can enjoy. Captivating his readers with the difficulty in his books and leaving them trying to figure out who did it, will make you want to keep reading to see what Robert Skuce will come up with next!


Bruno Norcross is a detective who never got over letting a serial killer get away. Now that Kiss of Death has re-surfaced; he is determined to close the case. The death of another young college girl has sparked outrage in Charlie Lassitor, the police Sargent, whose daughter was killed by this very killer. Bruno feels compelled to close this case, but the details get blurred when a new name enters the list of suspects. Can Bruno catch the killer before his killing spree ends and he vanishes again? Or will Kiss of Death once again elude him?

Who are your influences?
Stephen King is obviously a great influence and I always enjoy his books, but also have a couple lesser known authors that influence me and my writing. Rayne Hall has a Writers Craft series that I find myself always referring to over and over again. Charles Barnett has a book called The Deepest Sea. It’s still one of my all time favorite books and I admire his writing style.

When did you begin writing?
I wrote my first novel about four years ago, I would like to say it was a master piece and an amazing novel, but it wasn’t. What it did though, was show me that I could write a complete book and that each book I write gets better. 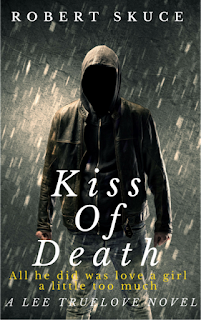 How do you come up with your stories, characters, character names, POV, etc.?
My stories ideas usually evolve from a few scenes that stand out and a theme develops. From there the characters develop. I try and create characters that I can relate to and truly twist their lives. My books usually jump from one to three points of view. Not just the hero, but the villain as well. I think it makes my books more fun to read and write.

Do you work from an outline?
I try and write from an outline of ideas but usually the characters come alive and the story takes on a life of its own.

Tell me about your favorite scene in your novel.
In Kiss of Death, Lee has been beaten down and a stranger comes up. The way he talks, you have hope that somebody is finally going to help the poor guy, then boom, the unthinkable happens.

Can you tell us a little about your writing philosophy?
My philosophy is to try and write the kind of story that I want to read. To put the images, I have in my head and make them flow into the pages of my books.

Have you ever tried writing in any other genres?
Yes, I have tried writing paranormal romance. My first book was a love story. The story itself wasn’t the accomplishment. It was completing the book. A few months later I reread the book and thought I can do better so I sat down and gave the character’s personality and made a better story.

Do you have any interesting writing-related anecdotes to share?
My books refer to Bloodvien prison which is based on the Kingston pen. I actually have a funny story about that. I told my parents that I was going to prison, but something happened that I had to go before the conversation finished. I checked my phone a few hours later and I had missed four calls. I guess I should have added that the prison is closing and it was for book research.

Learn more about Robert and his books at his website:

www.robertskuce.com/ or you can find him on Goodreads, and on Twitter.