Yesterday my girlfriend and I drove to Zanesville, Ohio for my first ever writer’s appearance to promote my novel, Extreme Unction. It was a beautiful, early August day; not too hot, a nice occasional breeze stirring in the air, no sign of rain – the perfect day for an indoor event. Unfortunately, it was also the perfect day for a motorcycle poker run and a civil war reenactment, both of which were also going on in Zanesville that same day. 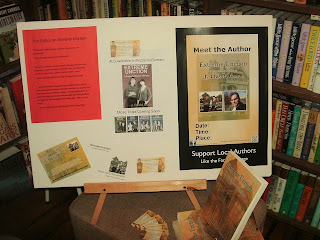 Just down the road from Shanachie Books (pronunciation key – bũkz) is an outdoor bar that on this particular day looked like everyone from east of the Ohio River who couldn’t afford gas for the trip to Sturgis decided –this is far enough, we’ll all just hang here. Simultaneously, everyone from north of the Ohio River (it bends – look at a map) who couldn’t get a GPS to direct them to Gettysburg because they don’t trust those devil devices had gathered on a hilltop with bayonets fixed and cannons gathered.
For the majority of our visit, not a single visitor dropped in to ask Nick Malone, the owner of Shanachie Books (pronunciation key – nik) if he had a copy of Fahrenheit 451 so their kid could finish his/her summer reading assignment before school starts next week. Nick assured me that this was unusual. Saturdays were usually a busy day, and the weather being so nice should have assured a regular stream of folk. My guess was that either everyone in town is either a biker, a Civil War re-enactor, or conversely were too afraid of bikers and/or irregularly spaced cannon booms to venture out of their house.
For over two and a half hours, Nick, Nick’s cat, myself and my girlfriend Cheryl sat about discussing books and the fact that Nick had turned his house into a bookstore so packed with literary tonnage that we were afraid that the “foom” sounds coming from over the hill every few minutes were going to collapse the floorboards. (Side observation about the sound of a cannon being fired sans projectile – it sounds a heck of a lot like a car door closing when you’re over a mile away and hoping for visitors.) 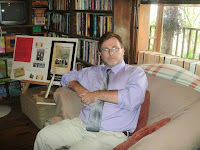 I had just about given up, and had signed a copy of the book to give Nick gratis with his promise to loan it about so that when I release my next novel there might be some interest generated. Then just a few minutes shy of the three hour mark, as we had begun gathering our promotion kit (some easels, a box of books, a large poster-board, some business cards, and the left-over brownies,) a father and his adult daughter on an outing dropped by to peruse the store. As they looked about, the group of us discussed the merits of reading vs performing Shakespeare, why Tom Cruise was a poor choice for Jack Reacher despite his having made a very entertaining movie, and how a used book store owner can answer whether he has a book or not without checking a computer database. Finally the father asked me what my book was about. (I’d been playing it cool and not doing a hard sale.) I gave him the blurb description and explained the fact that it was pastiche of Nero Wolfe which had itself been pastiche of Sherlock Holmes. He said it sounded interesting, and Nick loaned him the signed copy I’d given him after eliciting his promise to read and return it for the next reader.
I’m calling that a successful first outing. I got to spend four hours alone with the woman I love enjoying a scenic drive; I got to spend two and a half hours being entertained by an Irish story-teller; I got to eat brownies; and I established a relationship that will give me almost certain future sales.

And if you’re ever in Zanesville, Ohio, be sure to drop by Shanachie Books on Linden Avenue (pronunciation key – Lyn’-dƏn) and tell Nick I sent ya.