Several explosions have detonated along the eastern seaboard. News comes of similar attacks all over the country. As confused citizens and officials attempt to fathom what caused the calamity, a strange sickness overtakes a large chunk of the population. Like a plague, the sickness sweeps the country quickly killing a large chunk of the populace. Those left behind soon determine that they are immune to the sickness, but it’s too late to restore order. Gangs of opportunistic thugs have begun staking claim to territories. Meanwhile warlords and drug families in neighboring nations unaffected by the bombings begin mobilizing to breech the US to capitalize on the destruction of our infrastructure. At the same time, armed and haphazardly trained Taliban militia (who have taken claim for the explosions) have also begun entering as an invasion force. 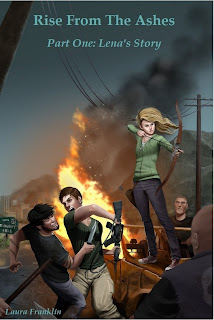 Several distinct groups begin a slow march north in late autumn, compelled by peculiar dreams that several who have assumed leadership roles have been experiencing. All of the various groups are being led to Lake Champlain at the Canadian border, but each must contend with the risks of freezing, starvation, exhaustion and run-ins with the various marauders they could encounter along the way.
Rise from the Ashes – Lena’s Story by Laura Franklin is the first book in a series intended for a young adult audience. The story telling is at its strongest when it is told directly through the POV of the young heroine, who in the first chapter locates a blank journal so she can write down her experiences before she forgets them. Several of the subsequent chapters – though strong in character development and narrative flow – falter a little in descriptive clarity, and there are stylistic continuity issues. It could have been well served to remain in beta a little longer perhaps. Although I doubt that the target audience would have as big an issue with this as I.
Unfortunately, I’m one of those people who didn’t read a lot of YA even when I was a YA. I read classics and detective fiction skipping right over the Hardy Boys and straight into Ellery Queen and Raymond Chandler. The first YA novel I ever read was The Outsiders, which I read for a girl when I was in my late twenties. So with SE Hinton as my only real guidepost, I’d have to say that teenage girls (fans of The Hunger Games and Harry Potter) would probably enjoy this story. Adult fans of more dystopian tales such as Mad Max or A Clockwork Orange will be disappointed by the lack of strong sensuality and violence. Also some more mature action readers may find some of the politics to be under-developed and pie-eyed; but it wasn’t written for those readers, so keep that in mind.
Overall, the novel reads like Stephen King’s The Stand meets NBC’s Revolution. It includes a few very nice manga-style illustrations, and a beautiful photographic vista is incorporated in the electronic version which is apparently the image from the back cover of the hard copy version. The story ends in a way that is satisfactory as a standalone episode, but it also is a clear set up for successive volumes. Buy it as an inclusion on the new Kindle you’re giving your teenage daughter this holiday.

Mick had his pistol out and dropped the first two bikes. The third spun around flinging gravel and dirt and took off. Loved the loyalty. One driver was dead and his girl started to scream and cradle his head. The other driver was shot somewhere and his girl was scrambling and patting the ground around her. It dawned on me she was trying to find her gun! What f-ing nerve. She was going to try to kill Mick. I was swinging Clint around to go help when another shot rang out.
I saw Mick with his arms out to his side, his right hand still holding his gun.
Then I saw the girl slump.
Mick just stood there.
It was like an eternity. Then he lifted his gun and shot the other girl and then the wounded driver. I watched his pale face. I knew he was wracked with remorse. I felt sick to my stomach. It was different finding my dad dead. Helping the neighbors bury the ones who died. Those people had died a sort of normal death, as if they all got really sick at once.
I watched these guys get shot down. Like mad dogs. Suddenly I had no strength and I slipped off Clint and crumpled on the ground sobbing.
Mick was there in a second.
“Did you get shot?”
I could only shake my head no.
“Oh. I see.”
Ed reached us then. He had been nicked by a bullet along his upper arm.
“Cry if you need to. But when you think about tonight, think about how they started firing on us the second they could. They didn’t even know we had guns to fight back. They were fixin’ to take us all down with no questions and no mercy. Your man did right. If we let ‘em live they would have killed other people along the road. That’s a fact.”
Later I was to realize that was about a month’s work of talking out of Ed.
I remember how quiet we all were that whole night around the campfire.
I didn’t blame Mick. He knows that now. Back then I was in such shock I couldn’t talk to him. I was shocked because I had never seen a violent death before. I had thought my whole world had been turned upside down by the flash/bangs.
No, this is when it really started to sink in.﻿