Spheres of Influence is a time travel novella which will drop on Kindle for 99 cents on August 15. 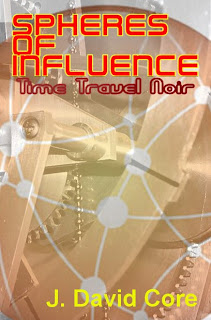 “Paul knew that when they dug the earth away, Hessman would gladly fund their scheme. In fact, now that the rod had penetrated, it was really a foregone conclusion. Paul was elated – at least until something in the earth grabbed the probe and pulled back.”
Three savants – a physicist, a mathematician, an engineer – and their wealthy benefactor have discovered the secret to time travel. Their first experiment in spherical time was a qualified success when the dog they sent into the future came back – shall we say – changed. Now they are ready for human trials, but one of them has an ulterior motive which threatens the very nature of time itself.
Since vengeance is his motivator, what can possibly dissuade him from his plan: fear, friendship, glory? With time quickly passing, can anybody find the necessary spheres of influence?