The charming Livia Harper has invited me to participate in the Writing Process Blog Tour, a sort of game of tag that also works kind of like a chain mail. Here's Livia's information.

When she’s not hanging out with her ginger husband and two stinky basset hounds, Livia Harper writes modern thrillers and mysteries in the vein of Megan Abbott’s Dare Me or Gillian Flynn’s Gone Girl. Her debut novel, Slain, tells the story of a teen girl murdered in a fundamentalist megachurch that’s full of secrets, and the fallen pastor’s daughter who must solve the crime.  Slain will be released in August of 2014.  Check out a free short story and sign up for updates at www.LiviaHarper.com.

Here is a link to the post where Livia tagged me (as well as two other authors you might also wish to check out) and described her own process. If you're feeling inquisitive, you can actually attempt to follow the chain all the way upstream to try and find the person who originated the tour. I walked it back about six or seven generations before I gave up. Maybe you're a little more curious than I.

The next step in the process is that I am to answer a set of questions about my process, and then I tag some other authors. So with no further ado...
Here are my responses:

1) What am I working on?
I have two projects in the works - which I mentioned in a recent post on my blog. The third installment of the Lupa Schwartz mysteries, Fair Play, is currently in beta. Meanwhile, I am creating the first draft of my first ever graphic novel, The Return of the Dragon.

2) How does my work differ from others of its genre?
My mystery novels are actually pastiche of the works of Arthur Conan Doyle and Rex Stout, so in that sense they aren't different. Of course, I don't directly parrot the motifs of those works, but the rough sketch - a genius detective with strong habits and opinions aided by an unctuous and loyal chronicler - is there. Several of the lesser tropes - a less capable police force, a housekeeper strongly involved in the day-to-day, a brother involved in a social organization, and others - are also worked into the canon.
However, my detective is more gregarious and lady-friendly. He's more openly political and willing to discuss his atheism. But the stories themselves are very much a throwback to the good ol' days of "fair play" mysteries. I present a puzzle for the reader to work out with the detective. All of the clues are there, and the solutions do not rely on information that was unavailable to the reader ever. So while the series is very much like mysteries from the golden age of dime novel mysteries, it really does stand out in today's procedural, multi-POV, danger-centric, story-arc-driven offerings.

3) Why do I write what I do?
My father was a huge reader and mystery fan. My first love was sci-fi, and I began my writing career trying my hand at writing something that Omni Magazine would publish. Ultimately, though, I came to appreciate Raymond Chandler and Ed McBain in a way that I never really enjoyed Asimov or Bradbury. Don't get me wrong, I admire Asimov and Bradbury, but their stories appeal to a more cerebral side of my admiration-checklist. Mysteries are just fun.
Although, to be totally honest, some of my stories I write just for the catharsis.

4) How does my writing process work?
Depends. What I try to do is write up a sketchy synopsis (some call that beats) which I then divide into chapters. The chapter ideas are then fleshed out in outline form, which I use to generate a first draft. Usually, though, it doesn't wind up going that way. Several times I have thought about a story for years before beginning the writing process with no story-ending in mind. For example, my novella, Wingman, began life as a short film idea, and I had no idea how that story would or could end before I decided to make it a novella and actually sat down and began writing.
Other times, I have a beginning and ending in mind, but no idea how I'm going to get from A to B. Those stories are a true journey of discovery, but since I know the end-game I have a loose structure to work with.
I also do a lot of research on the fly as I write, and on more than one occasion I have decided to shift the direction of a story based on some interesting factoid I picked up in my investigation.

Now as part of the rules for this hop, I get to tag a few other authors who will be posting their replies to these questions next week. Please check out their sites and bookmark them, then you can read their replies next Monday. 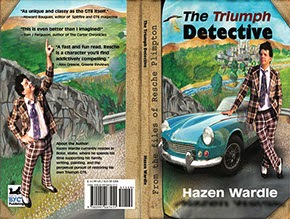 Hazen wardle attended High School at Uintah High in Vernal Utah, and has since worked multiple jobs, mostly retail related, while chasing a college degree.  Now working in the semiconductor business, Hazen has been actively pursuing his writing career. Currently he has one title professionally published, The Triumph Detective (triumphdetective.com) with 2 sequels in line and other titles in the works. His favorite genres to write are humorous mystery and science fiction. Visit  http://smallmarkbooks.yolasite.com/ for more information. Hazen blogs occasionally on Goodreads. Check it out here.
Mark Gardner

Mark Gardner lives in northern Arizona with his wife, two school-aged children and a black lab. Mark holds a degree in Computer Systems and Applications and is currently attending Northern Arizona University. Mark does his writing on an old Apple eMac and iPad utilizing Apple iWork Pages and iCloud. You can check out Mark's blog here. His books can be found for the kindle at his author page on Amazon here.

Those are my taggies. Make sure to check out their blogs, websites and books.
Posted by J. David Core at 7:54 PM