Resche Plimpton is an odd man with an odd style and an odd life’s goal. Convinced that Elvis Presley still lives, Resche runs a private investigator’s business under the first name of the king of rock ‘n’ roll hoping that one day a client will ask him to solve the urban legend of what really happened to the man who brought us Graceland. As he awaits that fateful day, Resche and his assistant/receptionist/gopher (whose name he doesn’t know at first) spend their days mostly waiting and occasionally toying with the occasional potential client should they call. 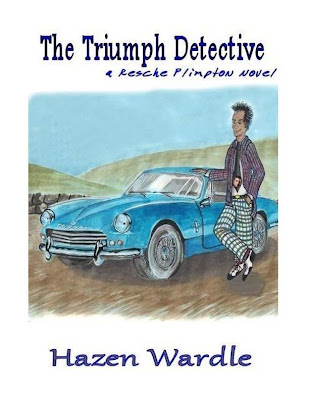 When a rich recent-widow calls offering thousands of dollars to investigate the recurring abduction by space aliens of her faithful German Shepherd, Resche accepts the challenge; and along with him we meet the members of a Realien-like space-cult, a cabal of video gamers, a probably-fake psychic who goes by a name which is a pun for the French term for fried potatoes, and several members of the local police constabulary.


With his penchant for plaid suits and classic British cars, The Triumph Detective is more in the mold of Dirk Gently and Daryl Zero than Sam Spade or Phillip Marlowe. Nobody is killed, no sexual tension smolders hotly just below the surface, and the reader is kept entertained more by the silly humor than by the not-so-tense plotting and never-quite hardboiled style, but you will be entertained nonetheless.
There are a few minor issues with the story believability-wise: there’s an unresolved episode involving a mysterious caller which nobody seems too worried about, a priest seems a little too willing to turn over control of a wedding to the quirky PI, an entire room overhaul (complete with repaired and repainted door, new furniture and hung art) is accomplished in an impossibly brief period of time, and too many people seem too willing to overpay for the services of a detective doing grunt work. However, given the whimsical world we’re introduced to in the first chapter, none of this seems unacceptably unorthodox in context.


The Triumph Detective is the first in the series of Resche Plimpton novels by Hazen Wardle. It’s available from Amazon and Barnes and Noble’s online store, as well as in ebook format and for the Kindle. Hazen invites you to like Resche’s page on facebook; https://www.facebook.com/pages/Triumph-Detective/135898216472744 and to visit his publishing website; http://smallmarkbooks.yolasite.com/

He gunned the throttle coming out of a sweeping bend in the road, the six cylinder inline engine growling as the car chewed up the pavement and the miles. Resche had taken the longest shortcut he could find to arrive at Laura Cunningham's place, and skirting Timil Deeps city limits in a rough counter-clockwise path was just the medicine the doctor ordered.
Sixties rock-n-roll blared from the speakers, though he could hardly hear the music over the natural noise of the car and the wind rushing in through the open windows.
He saw her long driveway up ahead and pressed the accelerator to the floor a little further. He turned into her drive doing sixty-five, spraying rocks behind him as he fishtailed down the gravel.
Off to the left a small herd of horses raced along the fence-line as if in challenge. Resche glanced once in the direction of the horses before mashing the accelerator again, letting loose his own 95 horses for a short distance.