“Like a skinny lumberjack.” That’s how the unnamed narrator of The Natural Victim describes Deiter Fox, the energetic, tall, blonde, bearded grad student and fan of detective fiction who happily accepts when Eric Wanbois invites him to prove his innocence in the murder of his lab mate, Jason Stampos. 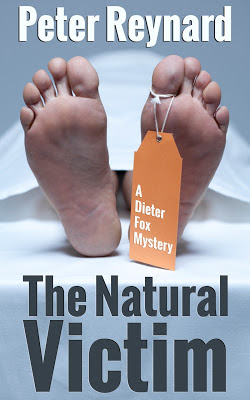 Stampos was not well liked. In fact, the more Deiter and his unnamed “Watson” look into his history, the larger the list of potential suspects seems to grow. Set in 1999 on the Ohio State University Campus in Columbus, Ohio, The Natural Victim by Peter Reynard is a closed door mystery with a twist. Records indicate that the accused used his pass card to visit the hall where the murder occurred on three separate occasions that fateful night. Witnesses alibi the client, but police are unconvinced. The accused had means, motive and apparent opportunity; and besides, there is what amounts to a holographic direct accusation in the form of Eric Wanbois’ name flashing on the victim’s computer monitor.
By the final chapter, Reynard has crafted a classic mystery denouement with all of the suspects assembled and all of the evidence and facts laid out in a buffet of reason and order. Among the pluses: the chapters are short and the technology is described in an accessible way. For the minuses: the characters could be more fully drawn in a longer version of the story, and the unique world which is Ohio State might have been better colored-in; but for the reader looking simply for the plot-is-king Dragnet version, The Natural Victim has a satisfying arc that builds suspense by revealing clues and shining a light on the process of the obsessive not-quite-a-genius.
The Natural Victim is available on Amazon for the Kindle. The author's website, Write by Writing, which includes a mention of this very blog, can be found here.


The last time I talked to Cynthia I had paid very little attention to her, since she was just another name on a long list. I looked at her more closely now. She was a short, slightly stocky girl with a ready smile. Her dark hair was in a loose ponytail, and I noticed now that she liked to tug on it and play with it as she talked. She seemed surprised to see me again but was agreeable enough to spare us a few minutes. We pulled up a couple of chairs and sat down. As I had been the one to talk to her the last time around, I took the lead again.

"Why didn't you tell me you used to date Jason?" I asked.

She stopped leaning back in her chair and sat up straight. "Because… because it was a long time ago and it’s none of your business."

"Look, we just want to make sure we know everything. And anything, even the littlest thing, could potentially help Eric," I said.

She didn't reply, but the wariness in her face relaxed. Then Dieter took a chance.

"Cynthia, someone saw you leave Jason's lab that night."

Her face crumpled and her body slumped back in her chair. "I swear he was alive when I left him," she said. “I can prove I was home by 12:30 that night, long before he was dead," she added desperately.

Dieter took another shot in the dark. "Was he blackmailing you?" he asked.

"Yes," she said dejectedly. "How did you know?"

"I didn't. But he seems to have done that to a lot of people."