(For the sake of their own safety and that of their loved ones, the writers have chosen to move forward in revealing this story under aliases.)

John Murray: A Vietnam vet, John Murray, later known as ”Papa,” has spent the majority of his adult life working as an undercover agent for the U.S., Canadian and various European governments. During this time, he rose from agent to the head of US Operations. 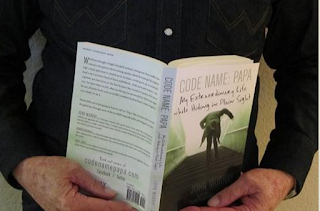 John was raised in the South by his grandfather who taught him at an early age how to survive by hunting and fishing, which all served him well for his future. He firmly believes that if he had not had the guidance of his grandfather and others who influenced his life that he never would have survived the ordeals that he did.
John, who enjoyed a very average American childhood, always wanted to be a ‘normal’ husband and father, but you’ll eventually understand why that was impossible.
Papa and his crews bore the responsibility of taking care of much of the world’s evil – evil that could never have come to the public’s attention.
Now retired, he and his wife are living in a small rural Western town. As ‘normal’ as he tries to live, he will always be haunted by the visions of what he saw and what he tried to prevent or rectify. ​

Sharon Murray: Sharon is a retired business executive who has lived in many parts of the US and in Asia.  Happily married to John for over five years, she had no idea about his work until she experienced his nightmares about the past. After discussions about how she might help John, he asked Sharon to help him write his memoirs just as something to leave behind, unpublished. After several years of working on them, Sharon convinced John it was a story worth telling to the world.
Working on this project has helped John start to face some of the things he experienced while trying to be a good guy in a world gone awry.

Abby Jones: This is Jones’ fifth book.  She also writes for numerous magazines.  The original manuscript was handed off to Abby, a friend of Sharon, who has a reputation for her easy, conversational writing style.
Abby worked with John and Sharon for approximately eighteen months to make sure John’s voice was never lost in the rewrites.  She notes that both John and Sharon were wonderful to collaborate with via phone, computer and text.  By the way, she has never met John!   Abby currently lives on the West Coast. She has traveled extensively and lived in many other parts of the US as well as in Europe. 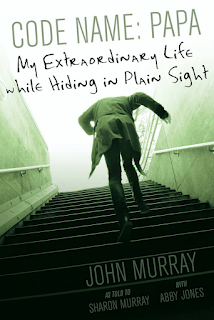 Who’d have thought a bright, but fairly ordinary young man from middle class America who got just above average grades, dated the same girl throughout high school and went to church most Sundays, would grow up to eventually head a very secretive band of brave individuals-- both men and women-- who regularly put their lives on the line because they wanted to protect the rest of you. Yet that;s what we did, often sacrificing our personal lives (four marriages for me, all in the book) and our health (countless broken bones, major surgeries, even death) to do it.
Meanwhile you’re just going to have to call me “Papa” like everyone else around the globe has through most of those wildly unpredictable and dangerous years.

After a lifetime of working for a secret international group, John Murray finally reveals his journey with the help of his wife, Sharon, and co-writer Abby. His memoir, Code Name: Papa – My Extraordinary Life While Hiding in Plain Sight, details his time within an organization that, while not connected to the US government, operated with the full blessing of top people in our government.
“With this book, I hope to educate the public and open up the conversation about what our country and others have really done on dangerous secret missions to help the world,” says John Murray (Papa), who deftly tells his fascinating and memorable life story, laying out facts but leaving it to readers to determine how they feel about each mission.
The highlighted missions include the deaths of eight counter covert operators in a major Las Vegas hotel conference room during a mission that has “stayed in Vegas” until now; a European mission to save sex slaves from major drug dealers; a successful all-out effort to save a small European country from takeover, and much more.
These are real stories, gritty and true—not the fantasy world of James Bond, Scandal, and others.


How long have you been considering turning your adventures into a memoir?
Quite honestly, I never considered doing this.  But, years after these missions were over, I continued to have nightmares and night sweats that scared Sharon, my wife of seven years.  She convinced me to tell her the stories and she’d write them down – then we could put them away.  So, I decided to do that.  She was shocked about my past life, but wanted me to share my life’s work with the world.  She ran the first chapter or two by a writer friend, Abby Jones.  It was apparent from the start that we’d make a great team to write and edit together.  After eighteen long months, we had a manuscript.  Now we’re finally starting to work on book # 2 of this planned trilogy.

Did you have to vet any part of your story through any government agencies?
Well yes, depending on the 'job' that I had to do. Regarding what country we had to work in, out of courtesy the United States government was always in the loop and gave us abilities to land at military bases and much more.  However, I had great leeway in what was done and the final say on choosing not to take on a mission.

I know that sometimes – for the sake of expediency – several real individuals in a memoir might be bundled into one character or time might be dilated. Is there any of this in your story?
No, never.  One of the most important things in writing this book was to honor the hard work and many sacrifices of my team members – many of whom I worked with for decades.  Our readers really become attached to these wonderful, crazy, self-sacrificing people!  The other important thing was to tell our readers what really happens out there.  I enjoy James Bond and other spy stories, but they are so far from the tough reality of the lives we lived!  No tuxedos, no champagne, just plain old-fashioned hard work!

Is any portion of the story fictionalized and if so how much would you estimate that is?
The times and places were sometime changed to a different area to protect not only ourselves but also to protect people/countries that were involved.  Yet, some of our mission locations were impossible to change, including the UK where many local citizens suspected seeing a UFO.  Also Las Vegas.  As we now say, years after that amazing mission, what happened in Las Vegas is no longer staying there!

Which locations in your missions did you enjoy the most and which the least and why?
The only thing that I truly enjoyed was when I got my crew and myself home safely. Though so many of our missions were difficult to handle psychologically, the one that disturbs me the most was the Russian women who were sex slaves and were murdered by the time we got to them.  Towing all those empty boats back to our ship was incredibly difficult.  But, many of our other missions were hard to shake off as well.  It definitely took its toll on all of us, on our marriages, and on our children – none of whom could know what we really did for a living.

Now that the writing bug has bitten, will you be writing any straight fiction?
Absolutely not!!!  (laughing)  I have complete admiration for people who write great fiction, so I’m going to leave that job to the experts.

If they ever make your book into a movie, who should play the character of Papa?
I think Matthew McConaughy would be perfect.  If not him, it would have to be someone who would come across as strong and  steady, who talked things out clearly – not a James Bond type. Gary Sinese also comes to mind, as does Woody Harrelson.   It could be a great and varied roll for someone to take on.  Surprisingly, my story regularly gets compared to both the TV show “Scandal” and to Navy S.E.A.L.’s Chris Kyle’s story, “American Sniper”.  I appreciate the compliments, but my story is very different.

Code Name: Papa—My Extraordinary Life while Hiding in Plain Sight is the first in a planned trilogy. John, Sharon, and Abby are currently working on the second book, about Papa’s mentor, Amy.