Book Review: The Case Against Atheism by Mike Dobbins 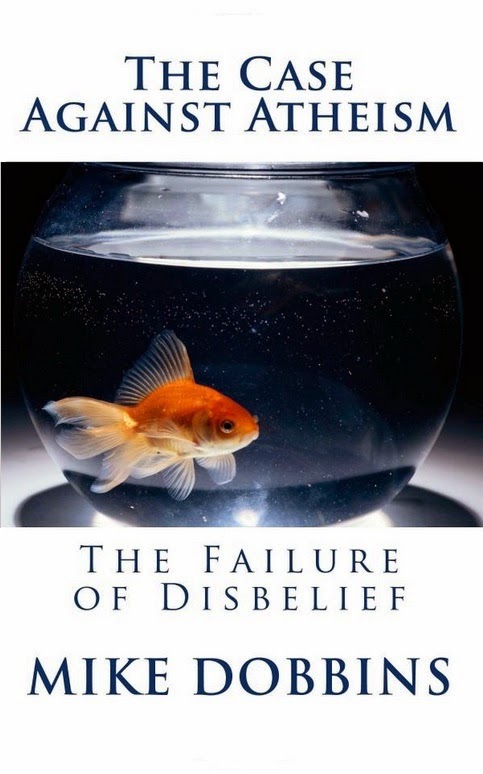 Reading The Case Against Atheism: The Failure of Disbelief by Mike Dobbins was, for me, like reading a rebuttal to my own book, Believe It, You Know an Atheist. Where my book tries to explain to theists and other non-atheists, like Dobbins, what atheism actually is and why it isn’t the bugaboo they’ve been conditioned to mistakenly assume that it is, Dobbin’s book repackages and regurgitates many of the old theistic and spiritualistic tropes that turned most atheists against religion in the first place. In fact, any non-fair-weather atheist who reads Dobbins' book is going to find himself or herself on common ground, reading for the umpteenth time the same tired old fallacies he or she has encountered dozens if not hundreds of times before in Church, family gatherings, and Internet message boards.

To be fair, on many pages Dobbins acknowledges that atheism is not an unreasonable conclusion. However, one gets the feeling that he is saying this only to dangle a carrot or extend an olive branch so the reader will be placated long enough to continue reading with an open mind – a characteristic which most theists seem to think atheists as a group lack.

Mechanically speaking, Dobbin’s book could be improved with a good edit. There are numerous typos and awkward phrasings as well as repetitive ideas and failings of parallelism which an extra set of eyes or two should have been able to catch. But the real failings in the book are in the arguments themselves. Dobbins targets a specific brand of militant anti-theism and strong atheism which really is a minority in the community. For this reason, most atheists reading the book will be insulted by a primary supposition that underlies the first three-quarters of the treatise; that atheism is the belief that there is no God. Yes, atheism can be the belief that God is non-existent, but for most atheists throughout modern history (at least since the time just prior to the American Civil War) atheism is not defined by what atheists do believe about God, but rather what we don’t believe.

It’s that final assertion, incidentally, that is the biggest failure in Dobbins’ attempt to demonstrate the failure in disbelief. After making such weak arguments for belief as noting that people who believe are sometimes altruistic or that atheism doesn’t speak to purpose (newsflash, it isn’t supposed to,) Dobbins presents an argument that the reality of the afterlife has been scientifically proven. Notwithstanding the fact that if such a discovery had been documented in a scientifically valid manner, it would have been front-page news and the focus of every 24 hour news channel for months (especially FoxNews,) Dobbins does take some time spelling out the circumstances behind his assertion.

It turns out that Dobbins is basing his claim on a study conducted at the University of Virginia School of Medicine by a Dr. Ian Stevenson which was published in The Journal of Scientific Exploration. The study is based on claims made by children that they were somebody else in a previous lifetime. The good doctor claims to have done case studies on several of these children and followed through on claims they made about past-lives which bore fruit.

This all sounds too good to be true, and would indeed be the final nail in the coffin of at least one aspect of atheism. The problem is it’s all much more dubious than Dobbins would have you believe. Turns out Dr. Stevenson actually founded the Society of Scientific Exploration which later published his work. That hardly qualifies as peer review. Moreover, the general consensus in the scientific community is that the Journal itself is nothing more than a clearing house for unsupportable woo.

Dobbins concludes by asking the atheist to consider if he or she is really happier than most theists and whether there is any virtue in trying to take away the faith that helps many persons get through their daily lives. Of course, one’s belief is not something one chooses, so even if it were true that faithful people are happier it is insulting to suggest that a desire to be happy can or should influence one’s core beliefs. Additionally, the search for truth doesn’t and shouldn't stop when it becomes inconvenient.

As apologetics go, Dobbins’ book is not the worst thing out there. He at least attempts to treat most atheists respectfully, and he avoids overt proselytizing and pro-monotheistic bias. However, as far as crafting a solid argument to support the book’s main premise, it just isn’t that successful.

Excerpt
Open-minded atheists or not, you command humanities love, respect, and compassion the same as any other human being on our tiny blue planet. I am fascinated by their arguments and opinions, support their right to free speech, fight efforts to vilify them, and have many who I consider friends. They have the same hopes, dreams, fears, needs, and wants as any other human. They cheer for their favorite sports team, seek to fall in love, support their brand of politics, and do good deeds in their community. Many seek justice and peace among peoples of the world. Many want to know if there’s a purpose to humanities existence, if universal moral codes exist, and how the universe came to be. Just like you and me, they strive to answer the big and small questions of life.
In the comparatively free and open society in the United States, I welcome the diversity of thought and spirited discussion that allows atheists and me to share ideas and criticisms in a respectful manner. Religious freedom is one of the cornerstones of our country. We have, I hope, progressed enough socially that most of us can keep an open mind, admit differences, and find common ground when it surfaces.
Yet, as many young atheists become more and more intolerant, and the tolerant atheist voices are silent or squeezed out, the new atheists place me and other tolerating individuals in a more indefensible position. Clearly, classical atheism should be and is tolerated by most in America, including me. But as more and more atheists become intolerant and embrace confrontational atheism, today’s atheism becomes difficult to tolerate. Just with any belief system, atheism too can radicalize and is doing so as I write. The more modern atheism asserts itself as ‘the truth’ and all others as ‘deluded’ the more it sounds like a fundamentalist religion that has lost its way.