Book two in the Lupa Schwartz Mystery series, Common Sense, will be officially released in February, however you can now get a pre-release copy on Smashwords. Enter coupon code LE27X for a 25% discount.

I’d finished describing my surprise at how easy it was to identify Dave since – after all — he’d been pulled from a river after drowning. I’d thought he’d be bloated or discolored, but he’d looked like himself. Then out of nowhere, Schwartz had asked me if Dave had often gone night fishing alone, and I’d gone suddenly mute. 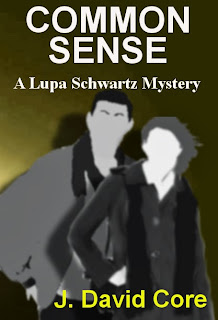 Common sense tells Cattleya Hoskin that her reporter ex-husband wouldn't have gone out night-fishing by himself in the middle of an investigation. The unaccommodating local authorities see it differently. In an effort to prove them wrong, Cattleya enlists the help of her private investigator friend, Schwartz, to follow through with Dave’s investigation—theft from the power grid in a small Ohio town.

The inquiry is complicated by crooked contractors, a menacing white van, and some long-abandoned coal mines and antebellum tunnels. Aggressively loud church bells and the amorous advances of a bounty hunter Schwartz brought in to help add to an already convoluted situation. Yet Cattleya feels she owes it to Dave to figure out what happened to him, for better or for worse.