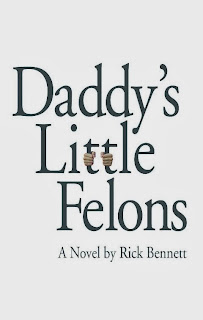 Daddy’s Little Felons by Rick Bennett is a thriller which takes its title from a term of endearment bestowed by the Mrs. O’Shea character on the criminal wards of Judge O’Shea’s court. Bennet is clearly computer literate, and the sub-plot concerning the hero’s takedown of the would-be hacker-world (if it can be called a sub-plot since the entirety of the plot is several interwoven subs) is easily the best aspect of the book. In fact, Bennet seems to understand this, as the text is riddled with hyper-links taking the reader to a website established by the author to serve as an encyclopedic set of footnotes explaining the creative concepts the author developed when conceiving the virus plot.
The book also contains several action and/or fight sequences which build in intensity as the story progresses … like a Bruce Willis movie. Early fight and action sequences read realistically, however later sequences are a little over-the-top – making them less Die Hard-like and more Hudson Hawk-ish. The characters are interesting, but a little one-note. The good guy characters and even one of the bad guys all seem to see the world through the same neo-con prism. Meanwhile three “liberal’ characters (all of them female) are shrill, belligerent, and self-destructive in their efforts to “discredit” Rapier.
Personally, I disagree with much of the political bias of the novel, and for some reason the fiction is heavy on the political bias. Nonetheless, I tried to approach it as a neutral reader, and it still came off to me as if the author had taken the actual personalities of Michelle Malkin, Sarah Palin, and Michelle Bachmann and simply superimposed them on fictional versions of Christiane Amanpour, Hillary Clinton, and Nancy Pelosi.
That said, I actually did enjoy the historical aspects of the story which include a detailed description on the Monroe Doctrine and the concept of “letters of marque” as well as some true-to-life history on the foundation of Salt Lake City and the episode of “The Mountain Meadows Massacre” and a real life villain named George Wood. I was also very impressed with the argument Rapier puts forward for deputizing American hackers to bypass international law and take down overseas cyber-terrorists due to the potential they have to disrupt commerce.
Overall, if your fiction tastes run toward Jack Reacher and your non-fiction tastes run toward George Will, you will probably enjoy Daddy’s Little Felons. If, on the other hand, your non-fiction tastes tend to favor Al Franken; you still might enjoy it, but you’ll probably put it down in a huff a few times along the way.
Rick Bennett’s website is The Morgan Doctrine and his book is available in electronic formats through Amazon.
Posted by J. David Core at 10:56 PM