Martin Van Dyke is a man with a plan – literally. Ever since his one and only girlfriend dumped him for his lack of ambition and prospects, Martin has carried a laminated sheet of paper in his breast pocket which outlines for him a course of action which he hopes will carry him through to the top of the guest relations industry ladder. Filled with Stewart Smally-esque platitudes and work-a-day advice, the plan is the one thing in Martin’s miserable life that gives him hope of a better tomorrow.
Meanwhile, the slack-spined Martin continues working the night desk at the fleabag Monarch Motel, just outside of Sparks, Nevada. His boss, Mr. Finley, is a demanding and lazy loner who has no faith in Martin’s abilities. Yet, Martin must find a way to impress Finley if he ever hopes to advance as his plan dictates. It is with this reality constantly in the fore that Martin is forced to deal with the worst night of his life. There’s been a robbery at the nearby Nugget Casino, and every character who arrives at the motel that night is suspicious and in a variety of ways, ultimately more than a little dangerous. 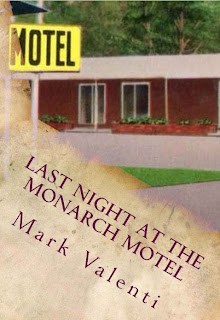 Last Night at the Monarch Motel by Mark Valenti is a farce in the vein of Get Shorty, Seven Psychopaths and The Ice Harvest. As black comedy, LNatMM is strongest toward the end. As straight up farce, it works all the way through, from its Joe Vs the Volcanoe-style opening chapters to its Repo Man-like conclusion. Some of the scenes had me literally laughing out loud.
The book almost reads as a film treatment in many ways. One scene in particular, involving a corpse dangling just out of sight of a local police officer as it slowly shifts under force of gravity while Martin watches nervously, is hilarious mostly due to the visuals it paints. Yet those visuals are so easily imagined because they feel familiar, as though I’ve seen Rowan Atkinson play that scene already.


The characters are all cartoonish by design. Some, such as the pot smoking homeless family and the secretive guest who demands privacy, are more believable; while others such as the overly amorous gun moll and the wandering religious cult are a little too stereo-typically obvious. However, all of the characters contribute a necessary story driving utility, and each brings a laugh or two.
The book can be found at Amazon and Tower Books, and Mark Valenti can be found at his blog.

While Martin mentally maximized his predicament, the man took a slow walk around the office. He finally stopped, struck a match against the wooden front desk and lit a filterless cigarette. He stared at Martin and blew smoke rings, making his Adam’s apple bob obscenely.
“You scared?” he asked Martin.
Martin, guessing at the answer least likely to get him killed, said, “Uhh…no?”
The man leaped forward and poked the gun in Martin’s neck. “Why not?” he said. “I got a gun on you.”
“I meant yes! Yes, I am afraid of you,” Martin said, changing course.
“What are you saying?” asked the man. “You think I’m dangerous?”
Martin stopped, considering his words carefully. “I think you’re…serious,” he said.
Apparently this was the correct answer. The man moved away slightly.
“Goddamn right I’m serious,” he said. He began pacing back and forth in the office in front of Martin. Finally, the man leaned against the front counter, his elbows propping him up.
“So. Nothing much to do here at night?” he asked Martin.
“I read sometimes,” Martin said, hoping to lead the conversation in a friendly direction. He tilted his head toward a paperback book on the counter. The man picked it up.
“Self-Esteem for Dummies?” he asked, reading the cover. Then, sneering at Martin he said, “What are you - one of them new age scumbags?”